To share your memory on the wall of Robert Theriault, sign in using one of the following options:

Print
Robert E. Theriault, age 83, died with his family surrounding him at Birch Bay Village in Hulls Cove on October 22, 2020. He was born on February 28, 1937 in Presque Isle, Maine to Mauna and Edward Theriault. Bob graduated from Husson College in Ban... Read More
Robert E. Theriault, age 83, died with his family surrounding him at Birch Bay Village in Hulls Cove on October 22, 2020. He was born on February 28, 1937 in Presque Isle, Maine to Mauna and Edward Theriault. Bob graduated from Husson College in Bangor, Maine in 1960. Shortly after graduation, he met the love of his life, Elaine Ann Goodwin. They were married on November 23, 1963 and began their life together in Bar Harbor, Maine. They raised their children Greg and Ellen here, who could not have imagined a better place to grow up. Bob’s career at the Jackson Laboratory in Bar Harbor began when Bob came to the island for a job as an accountant there. Initially he thought it would be a good place to spend the summer. Bob continued to work at the Jackson Laboratory for 40 years, from 1960 until he retired from his position as comptroller in 2000. His work at the Lab was an important part of his life and he treasured the lifelong friendships he made during those years. After his retirement, Bob and Elaine left their Bar Harbor home to move to Somesville, where they built a log cabin in the woods. Bob loved spending time at their home, working outside and entertaining friends, and he and Elaine continued with their favorite activities in Acadia: cross-country skiing, biking, kayaking, hiking, swimming and walking. In his later years he especially loved kayaking and going for a swim at Pond’s End. Bob enjoyed visiting “the County” where he was raised. He loved getting together with family, whether it be the Theriault clan for annual reunions or regular gatherings with the Goodwin side of the family. In his retirement Bob enjoyed traveling with Elaine to the Southwest and on several ElderHostel adventures. Their trips to Ireland were most special to him, and a favorite trip in recent years was one to Cozumel, Mexico with Elaine, his two children and their spouses. When he was no longer able to travel, Bob continued to love sharing the island with any friends and family who came to visit. Bob volunteered with many local organizations over the years, including the Rotary Club, YMCA, Safe Family Exchange, and Island Connections. After being diagnosed with Parkinson’s Disease, he and Elaine created and ran the exercise group “Keep on Moving” at the YMCA for those living with PD. Bob selected music for songs that they would sing in the group each week (and made sure they had cookies to share at the end). The Bar Harbor Food Pantry was an especially important cause to him, as he helped with its creation during his years at the Church Our Father. Religion and spirituality were an important part of Bob’s life and he and Elaine were active members in the Church of Our Father in Hulls Cove for many years, where they found a wonderful community of friends. Bob loved making his locally-famous “Baked Beans by Bob” for the annual summer Church Fair. Next to his family, Bob’s other great love was music. He sang and played the piano in high school and college. He played an integral role in the church music program throughout his lifetime and especially enjoyed his years of this at the Church of Our Father where he often played and sang with his friend Tony. Bob started the Gospel Gents music group and sang with the Mainely Music Barbershop Chorus in Bangor for many years. Singing with those two music groups brought him such joy. He was happiest when he was sharing his love of music with others. Bob moved to Birch Bay Retirement Village in 2019 and continued to enjoy music with daily music therapy, regular music performances and listening to his favorite CDs. Bob is survived by his beloved wife Elaine; his two children, son Greg Theriault and wife Darlene of Northeast Harbor, ME; daughter Ellen Theriault and wife Leah Hoover of Norwood, MA; two grandchildren, Caitlyn and Taylor Theriault of Pittsburgh, PA; sister Betty Benn of Ipswich, MA; brother Michael Theriault and sister-in-law Laura of Winslow, ME; and many nieces and nephews. All will miss him, his kindness, humor and love of life in their lives. Bob’s family would like to express their deep appreciation and gratitude for the caregivers in Safe Harbor at Birch Bay Retirement Village and Beacon Hospice. Their compassion and kindness as they cared for Bob is beyond measure. A celebration of Bob’s life will be scheduled at a later date. In lieu of flowers, donations in honor of his life may be made to the Bar Harbor Food Pantry, P.O. Box 434, Bar Harbor, ME 04609. Condolences may be expressed at jordanfernald.com.
Read Less

Posted Oct 29, 2020 at 09:20pm
I am so sorry to hear of Bob's passing. I worked with Bob for many years at the Jackson Laboratory. I have fond memories of Bob and the Financial Services crew. I have a picture of the crew when we all dressed up as Bob, with mustaches, jackets, and ties. I can send it if you want, but didn't want to post it here. Bob was a very nice man and had a good heart.

Alice Workman (Reginball) sent it to me last year, is a pretty cool pic.
GT

Posted Oct 29, 2020 at 04:25pm
My Dad.
How does one sum up a life of education, discipline, honesty, integrity, family values, strong friendships, music, song, an appreciation of nature, a marriage that most only can dream of, a role model for his children and a love of the Lord? I guess my first two words nailed it...my Dad.
Today he left this world to reunite with friends and loved ones who have gone before him and answer the call of the Lord to come home.
My father has been living with advanced Parkinson's disease for years now and his struggles are over...he is finally able rest in peace...
Comment Share
Share via:
MD

Posted Oct 27, 2020 at 02:26pm
Dear Elaine and family. What a wonderful tribute to Bob. His love of music and the way he shared it with so many will always bring a smile to my face. I am so glad that you got to be with him. Peace and comfort to you all. Martha
Comment Share
Share via:
TJ

Posted Oct 26, 2020 at 09:04pm
Elaine, Gregg & Dee, Ellen and Leah,
We send our heartfelt sympathy to you all. Bob was most special, always the same in his demeanor
with understanding and in a most caring way. From when I was a child, he loomed so tall, a gentle giant
with his grin and a chuckle. Music was so much a part of him and this was shared so generously.
He set an example that many aspire to and few reach in their lifetime.
He is at rest and has reaped his joyous final reward in heaven.
Love,
Theresa
Christopher, Allyson and Loretta
Comment Share
Share via: 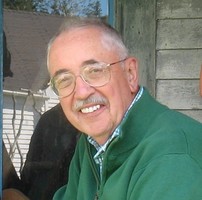