To share your memory on the wall of Edward Brown, sign in using one of the following options:

He graduated from Maine Maritime Academy, Class of 1951. Edward went on to lead a seafaring career spanning over many decades, ocean, straits, and seas. He sailed for United Shipping Lines as an engineer. Notably, he served in both the US Navy, and Navy Reserve for over 37 years of combined service, retiring as Commander. After serving in the US Navy, he and his wife, Elizabeth, who married in August of 1953, settled in Castine. Here, they raised their four daughters while Edward continued his career where it started, at Maine Maritime Academy. He led many cadets through the ranks, first as an engineering professor, and lastly as the Chief Engineer on the Training Vessel State of Maine, before retiring in 1996.

Many Maine Maritime Faculty, Staff and Alumni knew him as Easy Ed. To the hundreds of students, he taught, he was known to lead and guide with a firm hand, to bark, but hardly ever bite. To his crew at home, he will forever be remembered for the unconditional love and support he had for all. He could always be found tinkering with something and took great pride in building ship models of all kinds for display. He found happiness, smiles, and laughs at family gatherings, making apple cider in the fall, baking apple pie for all occasions, mixing ‘leaded’ eggnog, rolling potent bourbon balls, cooking rum cakes at Christmas, and skunking any brave soul willing to challenge him at a game of cribbage.

Edward was known to be Red Sox faithful, and an avid sports fan. His favorite players were his own. He could often be seen along the sidelines of the fields and courts, and most recently, the occasional ice rink, cheering on and offering words of encouragement to his adored athletes.

Edward, also fondly and more favorably known as Chief, Dad, Daddy-O, EB, Gramp, Bamp or Bampie, is survived by his four daughters, Janet Boyle of Bucksport, Judith (Michael) Marzolf of Castine, Jane (Alan) Joseph of Northeast Harbor, and Julie (Aaron) Vinson of Brewer. In addition to his girls and son-in-laws, he leaves behind his eight grandchildren, Erin Boyle, Amanda Starbird, Jennifer Marzolf, Christopher Marzolf, Andrew Joseph, Kate Joseph, John Joseph, Nicholas Vinson; four great grandsons; one great granddaughter; and Barbara Marzolf, an extraordinary lady who was like a daughter to him. He also leaves his brother, Buddy and wife Becky of Northeast Harbor. He was predeceased by the love of his life and wife of 67 years, Elizabeth; and a cherished son-in-law, John Boyle, and his parents.

Special heartfelt thanks to his caregivers, Dan, Gretchen, Mikk, Prudy, and Vicky for their love and devotion they gave to him and to our family.

A private burial was held at Forest Hill Cemetery, Northeast Harbor on June 6, 2020 at 3pm.

Gifts in Edward’s memory may be made to Hospice of Hancock County, 14 McKenzie Avenue, Ellsworth.

Print
A PRIVATE FAMILY SERVICE WILL BE HELD AT A LATER DATE.

Posted Apr 19, 2020 at 01:38am
Rest in Peace Commander Brown. You will meet with you Bride again and also your old buddy and associate at Maine Maritime Academy, George Jacobs - recounting your many escapades. You were a beacon to the Engineering Midshipman and respected by the Deck Midshipman as well. Smooth sailing, and FWE

Posted Apr 15, 2020 at 03:31pm
My condolences to the family of Ed Brown. His legacy as husband, father, grandfather and seaman is now complete. He's earned his eternal rest with his beloved bride and may God bless them always.
Comment Share
Share via: 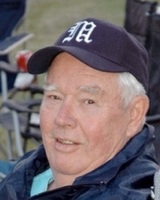