To share your memory on the wall of Carolyn Smallidge, sign in using one of the following options:

Print
Mt. Desert
Carolyn (Sullivan) Smallidge died Sept. 5, 2020 and is at peaceful rest. She was born March 16, 1933 to parents Donald I. and Maude (Whitten) Sullivan. She was proud to have been born and raised in Southwest Harbor.

... Read More
Mt. Desert
Carolyn (Sullivan) Smallidge died Sept. 5, 2020 and is at peaceful rest. She was born March 16, 1933 to parents Donald I. and Maude (Whitten) Sullivan. She was proud to have been born and raised in Southwest Harbor.

Carolyn was encouraged by her parents to think critically and stay well-informed, so her conversation was always thoughtful and her opinion on any subject was supported by well-spoken facts. Carolyn was never afraid of a good debate. This made her less than impressed by the public-school system, and while she loved her involvement in basketball and theater, she hated her classes.

At the age of 16, Carolyn met a shy, handsome young man named Nathan Smallidge. He never stood a chance. They married July 15, 1950. Her parents refused to give their consent for marrying so young until she promised to graduate high school, which she eventually did.

Nate was in the Navy, and for a short while they lived in North Carolina where Carolyn worked in the factories while Nate was away. After a few years, and much to her dismay, they returned to Mount Desert Island – Carolyn had been hoping the Navy would see fit to station them in Hawaii.

Nate settled into taking over the business of the Mount Desert Dry Cleaners, while Carolyn worked in the summer homes, and then in the emergency room of the local hospitals. But when Nate was finally left alone with the drycleaners, she joined him, working on the presses (a grueling job) and behind the counter, providing a face for the business. Carolyn was never afraid to say exactly what she thought to her customers, making the dry cleaners one of the great equalizers for the patrons there, regardless of their income or family name.

Carolyn was finally able to retire, and she lived out her life in her Pretty Marsh home, reading, watching movies, enjoying basketball immensely (Steph Curry and Lebron James were particular favorites), the occasional trip to a thrift shop, and following the lives of her grandchildren and her herd of deer. And early in the morning on September 5, 2020, she passed quietly in her home, surrounded by those who loved her, wearing her favorite lipstick – exactly as she planned.

Carolyn was predeceased by her parents, her brothers Colby and Donald “Tiddles” Sullivan, and her husband Nathan R. Smallidge. She leaves behind her sons, Bruce and wife Holly, Donald, and Patrick and wife Heidi. Her grandchildren were her pride, and she leaves behind Jeremy Carr, Nathan Smallidge II, Katherine Parsons, and granddaughter Greta Smallidge, who was also her best friend, confidante, caregiver, and willing partner in crime. Carolyn is also survived by a very beloved niece, Martha Buzzell, as well as many others, numerous in amount, who she loved dearly.

At Carolyn’s request, the funeral services will be private. Arrangement in care of Jordan-Fernald, 1139 Main St. Mt. Desert. Condolences may be expressed at www.jordanfernald.com
Read Less

Receive notifications about information and event scheduling for Carolyn

We encourage you to share your most beloved memories of Carolyn here, so that the family and other loved ones can always see it. You can upload cherished photographs, or share your favorite stories, and can even comment on those shared by others.

Plant a Tree in Memory of Carolyn
Plant a tree 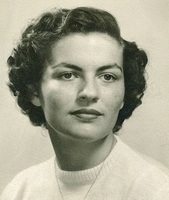