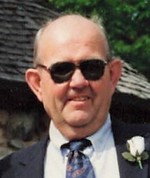 William Thomas Wallace, 86, died January 22, 2020 at his home in Northeast Harbor. He was born September 7, 1933 in Tremont, the son of Clayton E. and Lois M. (Ingalls) Wallace. Bill graduated from Mount Desert High School in 1952. He served in the U.S. Navy on the USS Hornet CVA-12, where he learned to be a pipe fitter.
On April 21, 1956 he married Lena May Spurling and they made their home in Northeast Harbor. Bill worked for C.E. Wallace Plumbing & Heating, H.E. Bucklin, as a carpenter and later for the Town of Mount Desert in the sewer department for many years. After leaving the Town of Mount Desert, he went to work for his close friend, Chuck Bucklin, at C.E. Bucklin, from which he retired.
Bill was a member of the Northeast Harbor Fire Company for many years. He enjoyed collecting “stuff.” He was known for his “dumpster diving,” collecting cans, bottles and other “treasures.” He enjoyed cutting and splitting wood. He frequently visited his son’s woodshop to collect scrap wood and chat with his friend Michael Higgins and the crew.
He is survived by his beloved wife, Lena May Wallace, his son, Thomas Wallace and wife Allyson, all of Northeast Harbor, a granddaughter, Aimee Brooks and fiancé Brandon Stockfis of Sarasota FL, grandson, Benjamin Wallace of Northeast Harbor, many nieces and nephews. He was predeceased by his parents and three brothers, Jack, Burnham “Pop”, and David Wallace.
Special thanks to Bill’s caregivers, Shelby, Nancy, Esther, Staci, Kim and Carlie.
Funeral Services will be held at 1pm, Thursday, January 30, 2020 at Jordan-Fernald, 1139 Main Street, Mount Desert. An interment was held at Forest Hill Cemetery, Northeast Harbor on June 16, 2020 at 1pm
Contributions in Bill’s memory may be made to the Northeast Harbor Ambulance Service, PO Box 122, Northeast Harbor, ME 04662
Condolences may be expressed at www.jordanfernald.com