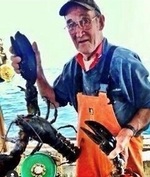 Flag
Great Cranberry Island Wesley Bracy Jr 83, died at MDI Hospital in Bar Harbor on Nov 14, 2021. He was born on Great Cranberry Island Feb 19 ,1938 the son of Wesley Sr and Annie Bracy.
Wesley graduated from Pemetic High School class of 1956. Following graduation, he joined the United States Air Force 18 Feb 1957 serving 4 years active duty at George AFB California as aircraft fuels systems tech, and 2 years inactive reserve. He was honorably discharged 17 Feb 1963. Once discharged that call of the ocean returned him home where he went back to lobster fishing with his family. Wesley also became a scuba instructor for YMCA Scuba Club in May 1968 teaching many students the wonders of the depths. He married his wife Lorraine Bracy on Great Cranberry August 11th ,1975, who also joined him in scuba diving ventures and assisted Wesley in instructing many students. They were married 46 years this August. Wesley continued as a commercial lobsterman long after his diving days. His entire life was being out there on the ocean in the boat and catching those Bugs with his son Scott.
Wesley is survived by his wife, Lorraine; son, Scott and partner, Michelle; daughters, Christina and husband Nick, Amanda; grandchildren, Bri, Fisher, Lyla, and Sophia; eldest brother, Lewis; sister, Eva; several nieces and nephews. He was predeceased by his parents Wesley Sr & Annie Bracy; brother Lester Bracy, and daughter Elizabeth.
Service date to be determined in spring 2022 so family can have proper Flotilla to scatter ashes.
Arrangements by Jordan-Fernald, 1139 Main Street, Mount Desert
Condolences may be expressed at www.jordanfernald.com