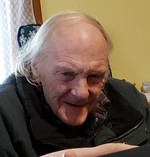 Walter “Bud” Howard Sanner, 74, died March 6, 2020 at the Maine Veteran’s Home in Bangor. He was born September 16, 1945 in Bar Harbor, the son of Walter William and June Bernice (Hamblen) Sanner.
Bud graduated from Pemetic High School in 1963, He attended Maine Central Institute and the UMO. He served in the U.S. Navy during the Vietnam Conflict, in the communications field and was honorably discharged. Buds employment in his earlier years included Bath Iron Works and working with his friend, Danny Mitchell in a sanitation business. During the mid 80’s Bud took over his father’s business, Walt’s Food Store, as owner and operator until it closed in 1988. After closing the store and his father’s death, Bud worked as a carpenter for Ken Hutchins, Inc. until he “officially” retired in 2008. Bud stayed busy for many years after retirement cleaning chimneys with his friend, Rusty Reed, up until just a couple of years ago.
In 1979 he married his wife, Debra Laurie (Reed) Sanner. In his later years, Bud took up a serious interest in genealogy, spending many hours researching and recording the ancestry lines of his family names and others.
Bud is survived by his wife of 40 years, Debra, two sons; Jeffrey of Trenton and Jarrett of Southwest Harbor, one daughter, Jillian and her partner Ben Lunt, and two grandchildren; Dominic and Lydia Lunt, all of Northeast Harbor. He was predeceased by his parents and his brother, David Sanner.
Friends are invited to call 1-2PM, with funeral services to follow at 2:00PM, Thursday, March 12, 2020 at Jordan-Fernald, 1139 Main St., Mt. Desert. Following the service a reception will be held at the American Legion Hall, Municipal Parking Lot, Southwest Harbor. A burial was held at Mt. Height Cemetery, Southwest Harbor on July 9, 2020 at 10am.
Contributions in Bud’s memory may be made to the Southwest Harbor Historical Society, Capital Campaign, PO Box 272, Southwest Harbor, ME 04679 or to a charity of your choice.
Condolences may be expressed at www.jordanfernald.com