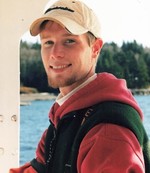 SOUTHWEST HARBOR- Travis R. Murphy, 36, died unexpectedly on January 4th, 2020. He was born October 28, 1983 in Blue Hill, the son of Ronald A. Murphy and Cindy “Lawson” Murphy. Travis attended Pemetic Elementary School and Mount Desert Island High School graduating in 2002.
Travis’s life revolved around lobster fishing. Travis started out at the age of nine with his grandfather, George Lawson. Travis fished side by side with “Pa” from 1992 to 2005 on the BELINDA L. In 2005, Travis purchased his own vessel, CINDY L, and fished her as well as fishing with his Uncle “Brud” on the “MISS BETH III”. For several years, he worked for John W. Goodwin Inc.
The pride and joy of Travis’s life was his beloved daughter, Alexa Murphy. You could see a twinkle in his eyes whenever he spoke of her. Travis is survived by his parents, Ronald and partner, Karen Burns; Cindy and partner, Michial Jewett; his daughter, Alexa; his sister, Chantel (Murphy) Flewelling and husband, Russ; a beloved niece, Logan Flewelling and beloved nephew, Reese Flewelling; special cousins, Isiah Gray and Dustin Lawson. He is survived by many uncles, aunts and cousins on both the Murphy and Lawson sides.
He was predeceased by his grandparents, Clarence “Nibby” and Jane Murphy-Greising: George and Charlotte Lawson.
A service of remembrance will be held at 10 am on Saturday, January 11th, 2020, at the Southwest Harbor Congregational Church, 29 High Road, Southwest Harbor. Those who desire may make a contribution in Travis’s memory to Downeast Horizons, 77 Union Street, Ellsworth ME 04605 or Goodwill (431 Lifeworks) 243 Leighton Road. Augusta ME 04330.
Arrangements by Jordan-Fernald, 1139 Main St., Mt. Desert. Condolences may be expressed at www.jordanfernald.com.