To share your memory on the wall of Thomas Cox, sign in using one of the following options:

Born in Oklahoma City, Oklahoma, he spent his youth in Fort Smith, Arkansas, and received his bachelor’... Read More
Seal Harbor -- Friends and family mourn the passing of T.A. (Tom) Cox, at his home in Seal Harbor, Maine, Feb. 28, 2019, aged 85.

Born in Oklahoma City, Oklahoma, he spent his youth in Fort Smith, Arkansas, and received his bachelor’s degree in Asiatic Studies (with a degree in Asian art) from the University of Oklahoma. He subsequently was commissioned as an officer in the U.S. Navy and served in the Western Pacific on the USS Taussig (DD-746) in the years following the end of the Korean War. After military service, he began a distinguished career in personal financial investment, initially at The Bankers Trust Company, and then in his own New York-based firm. For five decades he was a private trustee and financial adviser for families in the U.S., Europe, Latin America, and Asia.

Tom began summering on Mount Desert Island, Maine in the 1960s, first acquiring land on Sutton’s Island, and eventually purchasing his beloved home “Fir Lee.” Semi-retirement brought him to Maine full-time, and in his last decades he was a year-round resident of Seal Harbor. A generous yet understated philanthropist, Tom focused his energies on the conservation of Maine’s natural beauty. Thanks to him, much of Sutton’s Island is today under conservation easement. When the Maine Coast Heritage Trust alerted him that land on Mount Desert was threatened with development, he purchased it and donated it to Bar Harbor’s College of the Atlantic (of which he had been a Trustee) as The Cox Protectorate. Tom was also an early donor to what today is The Land & Garden Preserve. Other recipients of his largess range from The Friends of Acadia, the Metropolitan Opera, and Old Westbury Gardens, to principals of elementary and high schools in Maine, to whom Tom quietly supplied discretionary funding for students’ personal needs.

Apart from his generosity, grieving friends fondly remember Tom’s dry wit, voracious reading habits, passion for fine wines, and enthusiastic and eclectic art collecting, in which his tastes ranged from classical Asian and pre-Columbian art to the contemporary sculptures of Dame Elisabeth Frink and Marzia Colonna and the paintings of his friend Richard Estes. He was a member of the Union Club in New York and The Harbor Club in Seal Harbor. He is survived by his sister Betty Ann (Cox) Wonderly, his brother-in-law Chuck Wonderly, nephew Scott Wonderly and niece Cristi (Wonderly) McCarty.

An event in honor of Tom’s life-well-lived will be announced for Summer 2019 in Maine.

Posted May 25, 2019 at 07:15am
Tom was someone I knew my entire life growing up summers on Sutton Island. Always walking around with his dogs and taking in the beauty of the island. He was so generous to offer his Fir Lee home for my wedding on Sutton. His front porch and lawn were the perfect place for the occasion. Memories of the grown ups mingling over wine as a child to thanking him myself for the greatest day of my life on Sutton Island will be the fondest memories of Tom Cox with me always. Rest in Peace.
Comment Share
Share via:
JD

Posted Mar 04, 2019 at 06:20pm
My partner of 43 years, Tom Clark, and I were very sorry to read of Tom's passing in yesterday's New York Times. Tom first met Tom when both were members of The Metropolitan Opera Club. At the time, T.A. was living at 3 East 77th Street, and we still live around the corner. This was in the late 70's. When I gave a surprise birthday party at 1A East 77th Street for my Tom's 35th birthday, a shy Tom Cox thought that it was cool enough to host a 50th birthday party for himself the following December 15. That made us all very happy. We were fortunate to have been guests on Sutton Island at a memorable weekend party. When Tom moved to Maine full time, we ran into him and his closest friend and confidant: Art Keller, who were in Blue Hill for a message . Since we now spend August in East Booth Bay, the last time we saw Tom was for a lovely lunch in Seal Harbor at his home, and Art gave us a special tour of The Rockefeller gardens.
Tom was always a gentleman. He was the personification of kindness, living his life on his own terms and in a very quiet and understated way. He will be missed , but he will never be forgotten.
Our deepest condolences to his family and very close friends.
John M. Davis and Thomas C. Clark
Comment Share
Share via:
RJ

Posted Mar 04, 2019 at 02:20pm
Tom and I were contemporaries at Bankers Trust Company where I worked (1958-1995) on the commercial banking/credit side while Tom was on the investment side. So our paths rarely crossed, though I knew him slightly and knew of his work at the bank.

My wife and I have spent the past three years working on and finally completing a conservation easement on 55 acres that have an amazing 180 degree view of the sheer rock face of the Shawangunk Ridge just on the other side of the ridge from Mohonk Mountain House. This will help secure a wildlife corridor down to the Wallkill River. Rather more modest than the considerable conservation work Tom was able to perform but every little bit counts.

I salute his fine arts background (I was an English major), illustrating that a liberal arts education is and can be key to success in a variety of fields.

Tom's was a life well lived to the benefit of a wide circle including future generations. My condolences to his family and close friends. 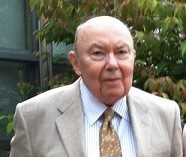