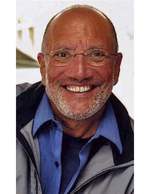 Stephen Paul Johnson, 72, passed away peacefully, March 24, 2020, at home, surrounded by his family and closest friends. Steve will be remembered as a kind man who was a devoted husband, father, papa, and friend. He often lit up a room with his smile, his wit, and his charm. He was born August 15, 1947 in Washington, D.C.
Steve served in the United States Army from 1967-1970, before attending the University of Maryland where he earned a Bachelor of Science in Resource Management in 1973. He then completed a MBA at Temple University. Steve moved to Maine in 1979 and began working at Eastern Maine Medical Center. There he met his wife and soul mate Deborah Carey Johnson with whom he raised two wonderful children Eric and Lisa.
In 1983, Steve established the popular “Whig & Courier” Pub and Restaurant in Bangor. Since 1995, Steve owned and operated Avalon Village, an independent living retirement community in Hampden which he founded. In 2016 while still actively involved in Avalon, Steve and Debbie moved to the coast of Maine in Southwest Harbor, where they built their retirement home and enjoyed the ocean and boating.
Steve was a devoted Rotarian, served as a District Governor and involved in many service projects, to include being a founder of Sarah’s House. In the 1990s, he joined Partners in Health and worked closely with Dr. Robert Bach to help the people of Porta Cavetas with the construction of a local hospital. Steve was a humanitarian who undertook numerous mission trips to help the people of Nicaragua for over thirty years.
Steve enjoyed music, current events, and was a diehard University of Maryland basketball, Washington Redskins, and Washington Nationals fan.
Steve will be lovingly remembered and sadly missed by a number of lifelong friends. Steve is survived by his wife Debbie of nearly 40 years, his son Eric, daughter Lisa and her husband Jeremy Hosier, his granddaughters Maxwell and Vail Hosier, his sister Pat and her husband Mike Watts.

Due to Covid-19, there will be a Memorial Mass at Holy Redeemer Church, Bar Harbor, to be announced at a later date. Arrangements by Jordan-Fernald, 1139 Main St., Mt. Desert. Condolences may be expressed at www.jordanfernald.com