To share your memory on the wall of Robert Pyle, sign in using one of the following options:

Having survived groundbreaking heart surgery in 1968, he started work at the Northeast Harbor Library in 1971 and began the process by which the State of Maine then certified librarians: a combination of courses, projects and work experiences that culminated in his status as “Librarian VI” (on a scale of 5, he would joke with a wink), a PhD equivalent. When he retired in 2011 he was the last and longest serving of that apprenticeship system. In 1973 he met and married the love of his life, his first wife, Miriam Louise Mahon.

Bob became Director in 1975 and enjoyed serving 40 years at his beloved Northeast Harbor Library, overseeing seven renovations and ultimately, in 2008, opening the new facility. Committed to his tenet of “The library is not about books; it’s about people and information”, he guided a doubling of the collection, promoted acquisition of extensive archives, and saw in the computer/internet era. During his career he was honored by numerous organizations including the Northeast Harbor Library’s Don Coates Award, and the Acadia National Park’s W.O. Sawtelle award. In his time in Northeast Harbor Bob was a pillar in many community organizations, including the Volunteer Fire and Ambulance Departments, and the Police Reserve. He also filled roles on many committees and boards.

Bob loved history and literature, classical music, and oratorio. In retirement he enjoyed several years as a “living exhibit” at the Isleford Historical Museum, which was founded by his grandfather. Bob was known for his irrepressible sense of humor and incorrigible punning. He loved the village of Northeast Harbor, and the Town of Mount Desert, and all the personalities who form it. Telling stories of village life and history was his specialty and he shared with enthusiasm. With similar energy he indulged his other great passion, music, and sang with the Acadia Choral Society for decades.

Print
Memorial services will be held at the Neighborhood House in Northeast Harbor, 11:00AM, Saturday, January 5, 2019. Graveside committal services will take place in the spring.

We have provided a digital copy (PDF) of the Memorial Program that we supply at the time of the service. To Download this file please click the filename below.

Posted Jan 08, 2019 at 12:53pm
Dear Louisa and family, I send my sincerest condolences in the loss of your loved one. It's wonderful that he has left such awesome memories in the hearts of those who knew and love him. Peace and love to you all in your time of grief.
Benita Weathers
Comment Share
Share via:
YR

your friends and colleagues at CHOP RIMGC

Posted Jan 04, 2019 at 07:15am
Dear Louisa and family, Thinking of you and your family during this difficult time. With deepest sympathy,

your friends and colleagues at CHOP RIMGC purchased the Peaceful White Lilies Basket for the family of Robert Pyle.

Posted Jan 02, 2019 at 01:52pm
Miriam, Your parents and my parents were good friends when they lived in Presque Isle, Maine. I remember how they talked about their new son-in-law. They spoke of him with great regard. Not having met him, I can tell by his obituary , he was a person who believed in his community. He shared his love and knowledge to so many. His sense of family is evident. Bob is gentleman that will be missed in your community and family. Our family sends their condolences to your family and friends.
Teresa Underwood Summerson
Presque Isle, Maine
Comment Share
Share via:
MA

Posted Jan 01, 2019 at 10:40am
In memory of a fantastic librarian and wonderful person. Our thoughts are with your family at this time.
Comment Share
Share via:
HS

Posted Dec 30, 2018 at 09:44am
Prayers for the family....
I remember Bob from Acadia Choral Society with his humor and his fabulous basso-profundo voice which, when I heard him sing a note in the "basement", I had to giggle. I also remember the kindness he extended to me in my very early days of Acadia Choral Society. My car broke down in the parking lot after a rehearsal. Bob, realizing this, made sure I had a place in town
to stay for the night and that my car would be safe at the church and towed the next day to be repaired. This was about 25 years ago.
He will be greatly missed by so many. 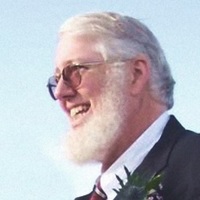