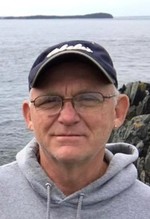 Robert Leroy Jones (69) passed away unexpectedly on June 16 in Bangor surrounded by family. He was born in Calais to Floyd and Helen (Parsons) Jones on May 25, 1951.

Robert graduated from MDI High School in 1969 and then enlisted in the Army in 1971. He served for two years on active duty and then was reserved for four more years. After his service, he began his 39 year career at the Jackson Laboratory, where he helped to build up the Foundation Stocks Program. He retired as Supervisor in Reproductive Sciences.

Robert was an avid outdoorsman, he enjoyed hiking, kayaking, snowshoeing, cross country skiing, biking, camping, and woodworking. He also played sports as well as supported the MDI athletic programs – sometimes as a fan, and sometimes as a coach. He was especially supportive of his daughter Sara’s YMCA swim team for the 11 years that Sara participated. Robert continued to volunteer after she graduated. Later in life, he enjoyed running in 5K races, including in England and in Hawaii.

Robert had a great love of life, he brought joy and love to all who surrounded him. He loved telling stories and making people laugh. He was a devoted husband, father, grandfather and friend.

Robert is predeceased by his parents and his siblings Maurice, Betty and Eleanor.

Donations can be made in Robert’s honor to the Bar Harbor YMCA Swim Team at 21 Park St, Bar Harbor, ME 04609. At Robert’s request, there will be no services. Condolences may be expressed at www.jordanfernald.com.