To share your memory on the wall of Richard Trundy, sign in using one of the following options:

He graduated from Ellsworth High School class of 1946 and went into the navy soon after. He served as an airplane mechanic until he was discharged on April 19, 1948 at the rank of Seaman 1st class. Richard married Audrey A. Young on July 10, 1954 and they resided in Surry until they moved to New York in 1960. He joined the Carpenters Union and worked in New York City and Long Island for 30 years before retiring in February of 1990 and returning home to Surry.

Friends are invited to call 6-8pm, Friday, June 7, 2019 at Jordan-Fernald, 113 Franklin Street, Ellsworth where funeral services will be held 10am, Sat., June 8. Interment will be at West Surry Cemetery, Surry.

We encourage you to share your most beloved memories of Richard here, so that the family and other loved ones can always see it. You can upload cherished photographs, or share your favorite stories, and can even comment on those shared by others. 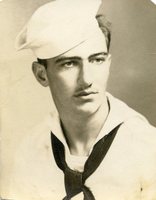