To share your memory on the wall of Richard Sassaman, sign in using one of the following options:

Richard Sassaman, the chronicler of our daily lives, died suddenly on Sunday night.

Richard Sassaman, the chronicler of our daily lives, died suddenly on Sunday night.

Born to Margaret and George Sassaman in Pittsburgh, PA. Richard spent his earliest life moving around the east coast every few years until his family finally settled in Harrisburg, PA.

After high school, and to avoid the draft, he enrolled at Duke University, taking his collection of 300 record albums with him. Needless to say, his dorm mates spent most of their time in his room listening to music and to Richard telling them interesting and unusual facts. (When he dropped out the following year his friends’ grades improved dramatically.)

He was drafted, but the Army decided they didn’t want him anyway. So he moved back to Harrisburg where he worked for an alternative newspaper, writing reviews of movies, books, and music — enlarging his already large collection of albums to heroic proportions.

When a friend needed his writing skills, he moved to Seattle where he edited books and pamphlets for her small alternative energy co-operative. His desk there faced that of the organization’s environmental designer, Susan Gross. With a combination of jokes, unusual facts, and downright annoyance, he sneakily wormed his way into her heart. Before she knew what hit her they were traveling around the country together in an old electrician’s van while Richard wrote US travel and history articles for over 80 different magazines including Air & Space/Smithsonian, Yankee, Travel & Leisure, Playboy, and Sports Illustrated. In the course of his career he visited every state in the US while passing through more than 70% of the nation’s counties.

As their parents aged, Richard and Susan moved back to Pennsylvania to care for them, spending their time living with his parents in Harrisburg and hers near Philadelphia. When their parents upped sticks and retired to Florida the pair was left homeless. Luckily he had a younger sister who had just bought land in Bar Harbor. So, in 1986, northwards they came to build a house within hailing distance of hers.

Richard soon became a fixture in the area, involving himself with many people and organizations and helping out where he could -- editing final project papers for COA students, drumming in local bands, driving for Island Connections, taking on the moniker “Deckhand Dick” as a crew member on Diver Ed’s boat, photographing friends’ weddings, volunteering at the polls, and using his writing skills to help out many non-profit organizations. And always, always checking out books from every library he could reach to collect even more odd and unusual information. In the pre-Google days he was his friends’ reference section. If you couldn’t find the answer, “No problem, just call Richard.” He would always know and would show them an article from his files on the subject.

In 1993 he read every Bar Harbor Times Police Beat from 1979 to 1988 (and most of the other articles as well while he was at it) and published his book, The Bar Harbor Police Beat, a collection of the best and quirkiest of the column.

Also in 1993, Richard and Susan (well, mostly Susan, really) gave birth to their son Ezra. Richard always told Ezra that he was their favorite son and Ezra’s conspicuous lack of siblings lent credibility to this compliment.

When WMDI, the local radio station started up, Richard was asked to host Bar Harbor Beat, a weekly broadcast where he interviewed local residents about their various and sundry vocations and avocations. He was interested in everyone and everything.

Richard was a night owl, saying he’d read that the most stressful hours of the day were between 6 AM and noon, so he avoided those times by sleeping through them. For years he was the unnatural naturalist on the Island Lighthouse Tour boat, presenting the historical information about the area to the tourists while trying to avoid questions about the wildlife. When the schedule changed and they told him he needed to be on the boat at 7 AM he decided to end that career.

Soon afterwards he acquired his perfect job — getting paid for reading books. He summarized them for a friend to inform her political advocacy work.

Those familiar with Richard know that he was never without a small spiral notebook and a pen in his pocket. Everything was recorded — names, odd facts, quotes, things to look up later. And every notebook was saved. But how many were there in total? Finding the cache of notebooks in his overstuffed office will be a Herculean task for another time.

Richard was a font of knowledge, a quick wit, a talented drummer, a first class photographer, and an abysmal handyman. He thoroughly enjoyed spending time with his friends, but even more so enjoyed his time alone at night to sort through everything he’d learned each day. He kept us laughing and informed -- whether we wanted to be informed or not.

This week, as we have been celebrating his life we suddenly realized that Richard would be the one recording, in his notebooks and with his camera, all the people who have stopped in to talk and console and tell stories and share food with his family. Our town’s chronicler is gone, but will never be forgotten.

Richard is survived by his wife, Susan; his son, Ezra; his siblings, Susan, Bob, and Barbara; his nieces and nephews, Jennifer, Steven, Benjamin, Kerry and their children.

In lieu of flowers, donations can be made in Richard’s honor to

Receive notifications about information and event scheduling for Richard

We encourage you to share your most beloved memories of Richard here, so that the family and other loved ones can always see it. You can upload cherished photographs, or share your favorite stories, and can even comment on those shared by others.

Posted Sep 03, 2019 at 02:29pm
Richard -- vastly underpaid workhorse of the Harrisburg Independent Press. He will be remembered fondly by all who knew him there.
Comment Share
Share via:
DI

Posted Aug 12, 2019 at 10:00am
Another interlude of sadness this morning reading your obituary... Even tho since our times at U M Machias and with ensembles & adventures around Maine venues & historical sites, back in the 90s & early 00's, we met up for odd events only a half dozen times a year... Richard was a truly unique friend & collaborator, who leaves an absence in my time & undertakings, but also a wonderful store of memories & ideas... Man, will I ever complete the dvd (or book) of the LTE 20th-Year Tour-to-Michigan-&-Back ? R I P, my friend, and I bet you're making some great sounds & images in the Angelic jam-scene ! We'll meet up there at some point not too far ahead..
Comment Share
Share via:
PF

Posted Aug 01, 2019 at 12:30pm
What a total shock this was to me! What a loss suffered by all who know Richard. I have missed my being able to see him so often since my job was moved to Ellsworth. I used to see him often and we had many a laugh. I so looked forward to seeing him because he could always cheer me up. My deepest condolences to the family and my thoughts and prayers are with you now.
Comment Share
Share via: 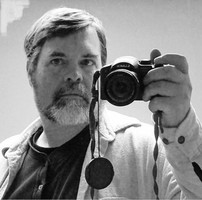