To share your memory on the wall of Redmond Finney, sign in using one of the following options:

Provide comfort for the family of Redmond Finney with a meaningful gesture of sympathy.

Born in Baltimore and known as Reddy, he was the son of Dr. George Fi... Read More
Redmond C. S. Finney, a retired Gilman School headmaster, died on July 31st at the MDI Hospital in Bar Harbor, Maine. The Upperco, Maryland resident was 89 years old.

Born in Baltimore and known as Reddy, he was the son of Dr. George Finney, a general surgeon, and his wife, Josephine Stewart. He was a 1947 graduate of Gilman School, where he was awarded the Fisher Medallion, the highest student honor. Mr. Finney earned a bachelor’s degree from Princeton University in 1951, and in his senior year he was captain of the wrestling team and named an All-American in both football and lacrosse. In 1954, after serving in the Navy during the Korean War, he joined the Gilman faculty to teach history, mathematics and religion and coach football, wrestling and lacrosse. Reddy earned a master’s degree from Harvard University, and in 1968, he was appointed Gilman School’s headmaster. In that role, his positive spirit influenced thousands of students, as he consistently encouraged Gilman boys to fulfill their potential by exemplifying honor and integrity and, simply, by doing the right thing. After his death, a good friend of his in Maine wrote, “Reddy’s life can only be measured by the lives he touched and by the friends he made. Reddy was a great husband, father, grandfather, leader and role model. He lived his life with a purity of purpose, a clarity of calling and a sincerity of being rarely found in one man. He lived his life to the fullest and had a passion and enthusiasm for life which he shared with all of us.”

A longtime summer resident of Northeast Harbor, Mr. Finney cherished the summers that he spent in Maine with his family and friends. He always appreciated the beauty of the coast and its nearby islands. He loved sailing and racing and spent a great deal of time in his adored garden where, surrounded by the natural beauty of Maine, he felt closest to God. His love of nature and respect for wildlife increased with every passing summer. Even as his health declined, Redmond enjoyed sitting on the porch of his Kenjockety home contemplating the majesty of Somes Sound and the awe inspiring mountains across the way.

A service of remembrance is planned for later this fall in his hometown of Baltimore, Maryland. Donations in Redmond’s memory may be made to the Northeast Harbor Ambulance Service or the MDI Visiting Nurses Association.

We encourage you to share your most beloved memories of Redmond here, so that the family and other loved ones can always see it. You can upload cherished photographs, or share your favorite stories, and can even comment on those shared by others. 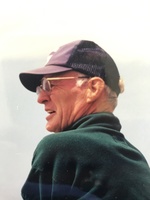