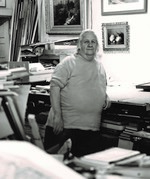 Raymond worked at the Jackson Laboratory for 36 years as part of the building security and later as a custodian. In 1974 Raymond while working nights at the lab wanted to learn how to do picture framing, so he went to Ahlblad’s Frame Shop to learn. He continued framing after his retirement and never left and eventually took over ownership. Raymond enjoyed the history of Bar Harbor and now he is a part of that history.

Raymond is survived by two sons: Peter and Michael Strout; a sister Sandra F. Rodick, all of Bar Harbor. He was predeceased by his parents, a brother Edwin and the mother of his children, Judith Rogers Strout.

At Raymond’s request their will, be no service.

Arrangements by Jordan-Fernald, 1139 Main St. Mt. Desert. Condolences may be expressed at www.jordanfernald.com