To share your memory on the wall of Raymond Strout, sign in using one of the following options:

Raymond worked at the Jackson Laboratory for 36 years as part of the building security and later as a custodian. In 1974 Raymond while working nights at the lab wanted to learn how to do picture framing, so he went to Ahlblad’s Frame Shop to learn. He continued framing after his retirement and never left and eventually took over ownership. Raymond enjoyed the history of Bar Harbor and now he is a part of that history.

Raymond is survived by two sons: Peter and Michael Strout; a sister Sandra F. Rodick, all of Bar Harbor. He was predeceased by his parents, a brother Edwin and the mother of his children, Judith Rogers Strout.

At Raymond’s request their will, be no service.

Receive notifications about information and event scheduling for Raymond

We encourage you to share your most beloved memories of Raymond here, so that the family and other loved ones can always see it. You can upload cherished photographs, or share your favorite stories, and can even comment on those shared by others.

Posted Nov 22, 2020 at 09:49pm
Raymond was an extraordinary individual - very knowledgeable and important, but under-the-radar. He was always an ally to me, personally and professionally. If my husband, Jonathan, and I took something to him to be framed and told him, no rush, it could be years, but if we expressed a need for speed, it was expedited. He never ever let me down with preparations for exhibitions at the Wendell Gilley Museum during my 36+ years there and he came through many times with tips about artifacts. Likewise, he respected and tapped my knowledge of all-things-Gilley. I don't think that there is a room in our house not enhanced by something that Ramond enhanced or even put us on to - like our big old map of MDI. He had a great sense of one's financial circumstances, but didn't hold it against you. When Jonathan and I fancied a large Soderholz urn sitting outside of his shop, he told us, "you can't afford that, but you can have it until I need to sell it." Sure enough, it graced our yard for years before he called it in. We will both miss his wit and wisdom. He collected history and now is an integral part of it. - Nina Gormley
Comment Share
Share via:
RZ

My friendship with your dad is something I valued more than you could ever know. I am so sorry for your loss. Raymond was as much a part of Bar Harbor as the town pier and I'll miss him very much.

Posted Nov 14, 2020 at 10:57pm
Mike and Pete, I'm so very sorry for your loss. I'll miss and love "Uncle" Raymond forever. Remember that time he told me I could have a piglet at the Common Ground Fair and I was all excited until he said I just couldn't bring it home in his new car?
Comment Share
Share via:

Posted Nov 12, 2020 at 05:29pm
I am so very sad to hear this news. Raymond was like an ageless elfin magic being with a twinkle in his eye and a great deal of love for Mount Desert Island. I always enjoyed talking with him and learning from him. While other frame shops had a bazillion frames to choose from on their walls, Raymond had a stash only known to him but he could find the right frame for your grandfather's studio portrait or your art collage or your oil painting. His studio was a bit like entering a magic cave.....the appearance of total random pieces of wood always made me wonder how he found what he was looking for. But he always did! And the work was impeccable- every piece of art treated with care and respect. I will miss you very much Raymond!!! Rest in peace and knowing that you touched many lives.
Comment Share
Share via:
DS

Posted Nov 12, 2020 at 02:07pm
So sorry to hear of your loss. Raymond will be greatly missed. It was always a pleasure to talk with him as he had so much knowledge of the area and the arts to share. He will be missed as part of the community here. Sending love and peace to his family. 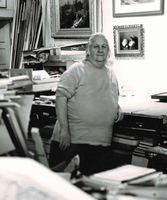