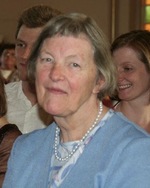 Pauline C. Farley, known to most as “Carol” passed away on July 10, 2020 on her 80th birthday from complications encountered after heart surgery. Born in Dedham, Maine to Harold O. Getchell and Avis L. (Pinkham) Getchell, she grew up in various places in Down East Maine eventually settling with her family in Massachusetts where she attended West Bridgewater High School. Carol would summer on the quiet side of MDI with her grandmother Bertha (Thompson) Pinkham. It was during these summer visits that she was introduced to the love of her life Richard M. Farley Sr. They were engaged in 1956 and married in 1958, enjoying 44 years of marriage. Carol was a life-time member of the Tremont Congregational Church where she wore many hats, serving as Sunday school superintendent, clerk of records, and treasurer (bookkeeper extraordinaire). She served on the board of Deacons, was a member of the alter guild, and a long-standing member of the senior choir. Aside from her church activities, she worked as a childcare provider caring for over 60 neighborhood children from 1970-2001 at which point because of her husband, Dick’s, illness she went and got her driver’s license (age 61) and took a job outside the home working as a residential healthcare provider at Sonogee Living and Rehabilitation Center. She retired from formal work at age 70 and went into full time enjoyment as Matriarch of the family, enjoying countless hours of family time celebrations, holidays, birthdays, and fire-pit parties where she always brought her signature potato salad. She remained active and independent right up until going into the hospital. She loved her walks to Back Beach, a good challenging puzzle, a good book series to read; (She thought the Outlander series was a bit “risqué”).

Carol was talented in the craft of knitting, crocheting, and needlepoint. She also was an accomplished seamstress. Many of her family and friends have been gifted with her creations through the years. Carol took great pride in being a grandmother and was active in the lives her grandchildren and great grands. She was deeply loved and admired by all who knew her as a quiet, steady, humble woman who was always available to listen and give quiet sage advice. She will be deeply missed by all whose lives she blessed, though she personally asks that we do not make too much of a fuss. She put this request in writing, “No fuss please, I’ll know what you are doing.”

A grave side service officiated by Pastor Cassandra Crabtree will be held Sunday, July 19 (Carol and Dick’s 62nd wedding anniversary), 2pm at Hill Rest Cemetery (Tremont). A reception will follow in the back yard of Tremont Congregational Church. If possible, b.y.o.s. (bring your own seat/lawn chair). Donations in Carol’s memory can be made to Tremont Congregational Church, P.O. Box #6, Bernard, Maine 04612.