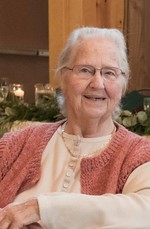 Maryann Carroll Minctons, 85, died October 28, 2019 at her home in Seal Cove. She was born May 22, 1934 in Bar Harbor the daughter of Charles B. and Mae (Sabonis) Carroll.
Maryann (Marney) grew up in Southwest Harbor where she graduated from Pemetic High School in 1952. She had four children and resided in Pretty Marsh and later built her home in Seal Cove. When her youngest child started school, Maryann joined her father Charles’ family business at Walls Coal Co., where she and brother Bill ran the company for nearly five decades until their retirement in 2007. During Maryann’s time at Walls Coal, it was not unusual for customers to stop in the office just to socialize.
Maryann was an avid knitter. She had an unbelievable talent for creating recipes for sweaters, vests, and even wristers, for any or all cold weather activities. You could often see her sweaters at the Bangor Auditorium during tourney time, or down at the Wharf when the men came in off the boats. Her family was very important to her. She spent many hours researching and recording family genealogy and always put family first before anything else.
She called her home Marney’s Meadow where she had beautiful flower gardens, large vegetable gardens, pigs, chickens, cows, and enjoyed watching all the wildlife. She hosted many family gatherings, barbecues by the fire, and family reunions to name a few. She was famous for her Beans, Peas, and Potatoes which could be found at most gatherings. She was one of the founding members of an annual community gathering in Southwest Harbor known as the Pignic. The idea of Pignic was conceived at a family pig roast for her twins, David and Becca, 21st birthday party. Pignic events ran annually for more than a decade and were attended by thousands.
Maryann is survived by her children: Beth Gott and husband Tim, David Minctons(predeceased) and wife Carla, Becca Ross and husband Mark, Wid Minctons, eleven grandchildren: Jenn, Melissa, Shelley, Missy, Anna, Jake, Jeremiah, Asia, India, Cassie, Brandy; and fourteen great grandchildren; and her dog and best friend Boomer. She was predeceased by her three brothers; Bob, Dave, and Bill Carroll.
Maryann will take her last ride on the Charles Bradley barge out Western Way. There will be a celebration of life announced in the Spring of 2020. Those who desire may make contributions in Maryann’s memory to the David Gray Scholarship Fund 110 Bass Harbor Rd Southwest Harbor, ME 04679

Arrangements by Jordan-Fernald, 1139 Main Street, Mt. Desert. Condolences may be expressed at www.jordanfernald.com