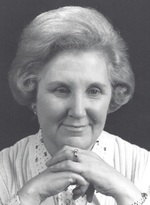 Margaret Anne Regec (Marge) was born on February 12, 1921, in Port Allegheny, Pennsylvania, to Jakub Regec and Maria Gronsky Regec, immigrants from Lesnica, (now) Slovakia. Marge graduated from Emporium, PA, High School. Later in life, she attended the College of Saint Elizabeth, and graduated from Thomas Edison State University with a B.A. in English. During the War she worked as a technical librarian at Sylvania Electric Products in Emporium. There she met Walter C. Freeman, Jr., a physicist from Rochester, NY, whom she married in 1943. In 1949, they moved to Morris Plains, NJ, where she enjoyed their many friends, the New York City and regional theatre, and service to her church and community organizations.

During her career in New Jersey, Marge served as executive assistant to the president of the College of Saint Elizabeth, and then, for 23 years, as an editor of elementary school textbooks with Silver Burdett & Ginn. After a brief retirement, she returned to Silver Burdett & Ginn as national coordinator of regional sales offices. Marge and Walt enjoyed annual trips to Europe and summers with grandchildren in New Jersey (Jacob Freeman, Alicia Freeman, and Hilary Freeman Donahue), and in California (Paul Freeman and Emily Freeman). Her baking of walnut roll and sugar cookies was a family, holiday staple for decades.

Following Walt’s death in 1995, Marge embraced a new life at Oak Crest Senior Living in Baltimore, MD. Well into her 90s, Marge served on numerous committees, as well as a term as vice chair of the Residents’ Advisory Council; as staff writer for the Oak Crest newspaper, Our Village Voice; and monthly columnist for The Northeast Booster Reporter of Towson, MD.

At Oak Crest, in November, 1998, Marge married Philip Hokemeyer, and cared for him during their last two years together until his death in November, 2007. Following a prolonged illness in 2014, Marge moved to assisted living at Parker Ridge, Blue Hill, ME. There, with attentive care overseen by Ginny Poland, RN, and activities by Alma Mote, and personal care from Nita Babson-Campbell, her energy and enthusiasm for life returned. Coming to Blue Hill was, Marge said, like returning home to Emporium.

Support from Stacy Limeburner, Rachel Munson, and other generous neighbors, and from the Northern Light Blue Hill Palliative Care and Home Health and Hospice teams, enabled Marge to enjoy her last summer at her family’s home in South Blue Hill, with visits from grandchildren (Amy Radtke-Cowsert; Matt & Andrea McCaffrey; Robert & Julia Denome; Gary and Jamie Schwemin Radtke; and Leif and Marissa Mangelsen-Sako) and great-grandchildren (Katy and Abby McCaffrey; Halyn and Hanan Achille; Samuel Radtke; Chloe Roeske; and Quincy Mangelsen-Sako); and a photo of her newest great-granddaughter, Sophia Donahue. Earlier summers had included visits from other great-grandchildren (Hunter Achille, Luke Radtke, Francisco Melo, and Matthew McCaffrey). All of her grandchildren and great-grandchildren, Marge said, made her very happy.

Late in August, Marge moved to the Island Nursing Home and Care Center, where she drove her motorized chair each day out into the lovely, enclosed garden to enjoy the blossoms and sun and fresh air. The family thanks the staff for their most attentive care in Marge’s final days.

Marge is survived by her sister, Catherine Litwinowicz, of New Castle, PA; her son, Richard Freeman, MD, and spouse, Nancee Bender, of Blue Hill, ME; her son Daniel Freeman and spouse Laura Freeman of Plymouth, MA; three step-children; 17 grandchildren; 16 great grand-children; and 9 nieces and nephews. Her brother, Jack Regec, of Emporium and sister, Mary Coledo, of Curwensville, PA, pre-deceased her, as did her son, John Freeman, of Walnut Creek, CA.
Condolences may be expressed at www.jordanfernald.com

This obituary is protected by copyright by Ellsworth. Proudly Serving the Community of Ellsworth. Ellsworth is located in the state of Maine, United States.