To share your memory on the wall of Kathleen Pinkham, sign in using one of the following options:

Kathleen N. Jacobs Pinkham, 91, died July 11, 2020 in Orono.
July 8th,1929 a beautiful daughter was born to Esther (Gott) and Leon Butler. Kathleen grew up in “McKinley” (Bass Harbor), Maine. She spent much of her childhood with Grandparents and Butler family in “The Cape”. Kathleen grew up with brother Fredrick Foss and brother Bertram Butler. She often cared for children, then worked at Underwood’s sardine factory. Roller Skating in Trenton, she met Samuel A. Jacobs Jr. and love was undeniable. Kathleen wed Sam in 1947. She made their home with son Danny while Sam finished service in the U.S. Army. In 1952, Esther and Leon Butler started Cornerstone Baptist Church in their farmhouse in Seal Cove of which Kathleen was the last charter member. Kathleen remained in the church and brought her children and grandchildren along.
After surgery, the Jacobs family grew with the births of Esther, Arthur, Joseph, and Valerie also Carolyn (who died at birth) and Jaqueline (stillborn). The couple outgrew the little home in West Tremont. Kathleen secured a loan and convinced Sam to purchase the church parsonage and land in Seal Cove in 1966.
They raised their children and ran “Sam Jacobs Seafood Express” together. The family was completed with the birth of Lisa. Kathleen had a huge part in raising her grandchildren. She cared for both her mother Esther and Sam throughout their battles with cancer, allowing Sam to stay in their home. After losing Sam, she married Forest Pinkham of Lamoine. The new millennium brought Kathleen to Ridge apartments in Southwest Harbor, after losing Forest and her Granddaughter the same day. Kathleen lived there, supported by her “Danny Boy”, Dorrie Lyle, daughter Valerie, and Pastor Greg & Diane Hewitt, whom she adored. After losing Danny & Dorrie, Kathleen knew the loving care of Valerie “Jake” & Granddaughter Acadia. Often, friend Alan Strout was called upon by “Momma Jake” and she loved him as her own child. Kathleen continued to go to Cornerstone services “As long as she could crawl”. Pastor Dan was often found to assist as well. Kathleen loved her neighbors at Ridge, playing “beano”, sunning with Carolyn, and chatting with best bud Madeline. Neighbor Winona drove her to church and Jane assisted with pain patches. Gatherings in the lobby were common. Kathleen gave the Blessing at Thanksgiving and enjoyed every event offered. She called Cousin Gladys Sawyer often, as well as friend of many years, Gloria Lindsey, daily. Kathleen had a sisterly friendship with Charlene Seavey. Attending Charlene’s 80th Birthday in Machias was Kathleen’s “last big day out” and great memory. The next year (2019) after suffering medical trauma that brought with it mild dementia issues, Kathleen’s new home was at Orono Commons. There she continued to play “beano” & found a new pal, Marion. She enjoyed going out for fried clams and shopping with Valerie & Acadia. Kathleen got to visit with her friend Gloria in a neighboring nursing home. Also, with her church sister Billie MacIntire and Pastor Dan. Kathleen will be remembered for her much-admired white hair, love of seafood & The Algerine Coast. She loved pets- especially beloved cat “Mr. Cuddles” & dog Saufen. Kathleen taught herself to play piano by ear & drive in a ’36 Chevy. Her eloquent cursive was never absent from a card or letter. She was lovingly referred to as “Ones” by Sam, “Grammie”, and Kath or Kay by friends.” My Rock” was Grandson Leon’s call.” Mom” the title that owned her heart. She leaves behind her children (and spouses) as well as numerous Grand, Great-Grand and Great-Great Grandchildren. Her only nephew Stevie Butler that she loved dearly as well.
Kathleen’s 91 years brought many illnesses, both physical and mental. She prayed for healing, not only herself, but for her family that her illness grew into. The bookmark in her Bible reads:” Children are the hands by which we take hold of Heaven”. Believing children are not ours, but a Blessing lent to us, Kathleen gave the land acquired from her church to her children. Her prayer for her children to be family together with God. “For Heaven has no separation or division, nor does a Mother’s love.” Even her dementia could not erase this prayer.
Kathleen went home to her Lord July 11th, 2020. She tested positive for Covid 19, which will delay her services. A world of Thanks to Cornerstone Baptist Church, Dr. Hanke, Dr. Davidson, Carroll Drug, Southwest Harbor Ambulance, Mt. Desert Nursing, MDI Hospital, MDI Housing, Somesville Rehab, and Orono Commons. Allowing Kathleen to live independently, with dignity, would not have been possible without your caring hearts and hands.
Ephesians 4:32

Receive notifications about information and event scheduling for Kathleen

We encourage you to share your most beloved memories of Kathleen here, so that the family and other loved ones can always see it. You can upload cherished photographs, or share your favorite stories, and can even comment on those shared by others.

Plant a Tree in Memory of Kathleen
Plant a tree 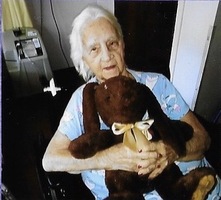