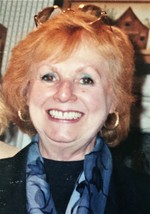 Joan Greve died unexpectedly on June 8, 2020 while living with her husband at Westgate Center, in Bangor ME. She was born April 14, 1937, in Brooklyn, NY, the daughter of Richard 0. and Adele A. (Quadrio) Gudat.
Joan graduated from Lindenhurst High School and went on to receive her LPN. She met and married the love of her life, Ken, and they settled down on Long Island and raised 4 children. Joan furthered her career in Nursing by receiving her RN from Suffolk Community College, and her Bachelor's in Administration from St. Joseph College. Joan was Director of Nursing at Port Jefferson Health Care Facility, where she also was the Infection Control Director and Nursing Home Administrator. She then went on to be the Director of Nursing at Peconic Bay Skilled Nursing and Rehabilitation and Island Nursing Rehabilitation Center. After retirement Joan and Ken moved to Lake Ariel, PA to creat e a house in the woods, then to Ocala Florida, to get away from the snow. When it was time to be closer to family they moved to Summerville, SC, and finally to Bangor, ME. Joan had many passions, two of them being singing and dancing. She was a great entertainer, and performed at The Legends in The Hideout after she and Ken moved to PA. She taught Sunday School at the Congregational Church in Wading River L.I., and in Ocala Florida. She was a member of the Lioness Club and loved her Red Hat Ladies Club in Ocala.
Joan is survived by her husband Ken; her brother Richard Gudat; children Joan, Laura, Linda and Kenny; grandchildren Jessica, Ken, Kyla, Travis, Alexis, Alexandra, Alyssa, and Kylie; great grand-children Abigail, Rhys, Kenneth James and Adalyn Mae.
A celebration of life ceremony will be planned by the family at a future date.

Arrangements by Jordan-Fernald, 113 Franklin St. Ellsworth. Condolences may be expressed at www.jordanfernald.