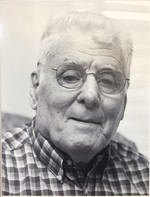 SOUTHWEST HARBOR – Jarvis Ward Newman, 84, died peacefully September 1, 2019, at Birch Bay Village in Bar Harbor. He was born July 6, 1935, the son of Laurence and Eleanor (Jarvis) Newman in New Haven, Connecticut. Jarvis graduated from Pemetic High School, SWH, in 1954. Through junior and high school, he lobstered and fished with his father and grandfather, worked at the Gordon & White Garage, and had what became a life-long interest of restoring cars. He graduated from Wentworth Institute in Boston in 1956 from the aircraft maintenance program. His first job was with General Electric in Cincinnati, Ohio, testing jet engines. After two years there, including six months of basic training in the US Army, he moved to Massachusetts to work for GE in Lynn. He found an apartment in Marblehead and worked for the Eastern Yacht Club summer nights and weekends.
Early in 1961 Jarvis called Susan Bunker, a Southwest Harbor girl who was attending school in Boston, and later that year they were married in the same church they had both attended in SWH. In 1962 after their first daughter, Kathe, was born, Jarvis went to work with the Stanley Elevator Company of Nashua, New Hampshire, installing elevators throughout northern New England. Six months after the birth of their second daughter, Kim, in 1964, they returned to Southwest Harbor when Bob Hinckley offered Jarvis a job in the fiberglass department of the Henry Hinckley Company. After learning the fiberglass process, Jarvis saw a need for a rowboat or yacht tender to sell sailboat owners. He began building them at home and sold his first one in 1966. In 1968 Jarvis and Sue purchased The Village Washtub in town, and Jarvis left Hinckley’s to build rowboats in a shop he built behind while Sue ran the laundromat. At that time he thought he would build a classic Maine boat, a Friendship Sloop, in fiberglass, so he used a wooden 25’ sloop to build a hull and deck mold. In 1969, 50 years ago this month, launched his first fiberglass Friendship Sloop that continues to sail out of SWH today. In 1970, Jarvis Newman Boats was formed, and the family moved to Manset, where he built a larger shop behind his grandparents’ house and expanded to include powerboats and a larger Friendship Sloop. The demand for his hulls became so great that he made the decision to build with three employees only the hull and deck with engine installed and ship them to other boat finishers. During the ‘70s, Jarvis also restored two original wooden Friendship Sloops, Venture and Dictator, selling the first and keeping the second as the family boat. The Dictator restoration was chronicled in Time-Life books, The Classic Boat. He sailed her in races at Friendship Harbor every summer as well as locally with friends and family and single-handedly. In 1978 he sold the boatyard, and in 1980 started Newman Marine Brokerage, spending the next 35 years selling boats, and working on his own to use, or better, sell.
Jarvis served on the board of directors of Bar Harbor Banking & Trust for 30 years. He was a Vestry member of St. John’s Church, the SWH warrant committee, was a member of the Lions’ Club, the Causeway Club, the Friendship Sloop Society, and the SWH Bullseye Fleet. He was an honorary member of the Tred Avon Yacht Club in Oxford, Maryland, and recently he was awarded the Maine Governor’s lifetime achievement award for promoting Maine’s boat-building industry. Starting with what seemed a simple rowboat, Jarvis’s business expanded to include classic Friendship Sloops, lobster boats, and Downeast pleasure boats, enjoyed by boaters far and wide.
In 2016 when Jarvis suffered physical problems along with his dementia, he moved to Birch Bay Village in Bar Harbor. While there for 3 ½ years, he made many friends with other residents and caregivers while enthusiastically participating in the many activities that were offered.
Jarvis was predeceased by his parents; older brother, Larry Newman; and twin sister, Janet Cutliffe. He is survived by his wife, Susan Bunker Newman, daughter, Kathe, and husband Dan Walton; daughter, Kim, and husband Tim Kearns; grandchildren Susan Falt, Sarah and husband Peter Philbrook, Gordon Falt, and Claire Kearns, and many nieces and nephews.
Friends are invited to call 4-6pm, Friday, September 13, 2019 at Jordan-Fernald, 1139 Main Street, Mt. Desert where memorial services will be held 1pm Sat., Sept. 14, with a reception to follow. Jarvis will be laid to rest at Mount Height Cemetery, remaining in his much-loved hometown of Southwest Harbor.
Those who desire may make contributions in Jarvis memory to the Southwest Harbor Historical Society, PO Box 272, Southwest Harbor, ME 04679.
Condolences may be expressed at www.jordanfernald.com