To share your memory on the wall of Harold Johnson, sign in using one of the following options:

Provide comfort for the family of Harold Johnson with a meaningful gesture of sympathy.

Print
BANGOR Harold Dennis Johnson, 96, died January 7, 2020 in Bangor. He was born May 17, 1923 in East Sullivan to Fred Billings Johnson and Eva Lucinda (Merchant) Johnson, the sixth of their eleven children.

Harold was in the Class of 194... Read More
BANGOR Harold Dennis Johnson, 96, died January 7, 2020 in Bangor. He was born May 17, 1923 in East Sullivan to Fred Billings Johnson and Eva Lucinda (Merchant) Johnson, the sixth of their eleven children.

Harold was in the Class of 1942 at Sullivan High School. He received his diploma although he left school two months before graduation to work in the shipyards in South Portland as part of the war effort. He enlisted in the US Navy in January 1943, and served in Aruba and Okinawa. He was discharged in 1946. He completed a two year business course at the Maine School of Commerce in Bangor, now Husson University, in 1948, taking advantage of the GI Bill for tuition and the “52/20 Club” for living expenses.

Harold married Vera Helen Freeman of Milbridge in 1948 and they had a daughter, Diane Wilma, before divorcing a few years later.

After college, Harold worked a number of different jobs. He lobster fished, worked in a grain store where he kept the books and unloaded freight and delivered grain, worked at a lumber company doing accounting by day and bundling shavings in the evening, was a plumber’s helper, and did the bookkeeping for a family-owned mobile home business.

Harold and Leona Phyllis Welch of Bradford married in July 1953 and their daughter, Prudence Lee, was born in 1965. They celebrated 61 years together before she died in 2014. Harold went to work as a life insurance agent for New York Life Insurance Company in 1959. He liked meeting people, going places and the challenge of helping people plan their futures. It was a career he nurtured with educational conferences, courses of home study, and experience for 44 years, passing on his highly successful business to a colleague when he was 80.

An avid outdoors man, Harold grew up bird and deer hunting, as well as fresh water and salt water fishing and he enjoyed those things throughout the rest of his life, happily passing those passions along to his grandsons.

He and Leona traveled often, spending winters in Florida for a few years. They built a camp themselves on the coast, hand carrying load after load of granite rocks from the shore to the camp site. That camp gave them and their family and friends happy summer days on a beautiful stretch of Flanders Bay.

Harold is survived by his two daughters and sons-in-law, Diane and George Deans of Sullivan and Prudence and Jerry Billings of Brewer; his sister Ruth Mack of Pennsylvania; grandsons George T. Deans and his fiancé, Amanda Warren of Biddeford, John H. Deans and his wife Liia Uustal of Bowdoinham, Connor M. Billings of Rochester, New York and Cameron T. Billings of Brewer; two great-grandchildren, Abner and Eloise, and many nieces and nephews. He was predeceased by two brothers and seven sisters, including one who died in infancy.

Harold’s family wishes to thank the exceptional staff at the Sylvia Ross Home in Bangor. The last chapter of his life was rich and happy because of their professional care, their many kindnesses and their sense of fun.

A memorial service and coffee reception for Harold will be on Saturday, January 18 at 1:00 p.m. at the Jordan Fernald, 113 Franklin St. Ellsworth. Burial with military honors will be next summer at York Hill Cemetery in Sullivan.

Memorial contributions may be made to Partners for Peace (formerly Spruce Run), PO Box 653, Bangor, ME 04402-0653 which reflects Harold’s concern for people, especially young people, having to start over after domestic abuse, or to The Sullivan-Sorrento Historical Society, PO Box 44, Sullivan, ME 04664, which cares for a collection of artifacts and documents about his Johnson family.
Condolences may be expressed at www.jordanfernald.com

We encourage you to share your most beloved memories of Harold here, so that the family and other loved ones can always see it. You can upload cherished photographs, or share your favorite stories, and can even comment on those shared by others.

Posted Jan 17, 2020 at 12:10pm
To Harold Johnson's Family. I am genuinely sorry for your loss. I am Don Howard; a former New York Life Agen; now retired after 43 years. I first met Harold shortly after becoming an agent. We hit it off. He was instrumental in helping me make my career successful. I considered him to be my mentor.
Sincerely, Don Howard

Posted Jan 09, 2020 at 04:42pm
Uncle Harold always was a snappy dresser and always was organized, and a diligent worker. I loved him so much. He was my Father’s younger brother and they remained close throughout their lives.Herb and I wanted to express our condolences to his two daughters, and their families. Your Dad was a good man and he was a wonderful provider. May you take comfort in all your many memories.Uncle Harold had a good life and he found happiness in many things and was proud of his family.You will be missed by many uncle “HULLY” Godspeed.
Comment Share
Share via:
P

Posted Jan 09, 2020 at 03:54pm
Uncle Hully, a force of Nature.. had an opinion, and let you know you were wrong if you didn’t agree with it! Handsome as the day is long.,From the moment he entered this world until the moment he left it. My mother entertained me in my youth so many times with “Chickie and Hully stories” she could have written a book! There is a void in the universe that is “Hully” shaped, and it will never be filled. He was an old school, straight up, tell it how it is, no nonsense “Down Eastah” And will be missed. Love you, Uncle Harold. Please know my heart is with you Diane & Pru.. wish I could be there to give you hugs and support.
Comment Share
Share via: 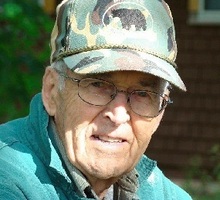