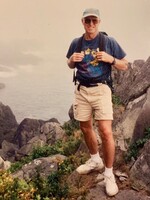 Southwest Harbor
H. Stanley (Stan) MacDonald, Jr., age 83, died peacefully on April 15, 2021 at his home at Birch Bay Village in Bar Harbor with his wife Binnie at his side. A man in constant motion most of his life, whether on his bicycle, skis, skates, kayak or windsurfer, Stan handled his final years with Parkinson’s Disease with grace, patience and gratitude for his care and surroundings.
Stan was born on September 18, 1937 in New Haven, CT to Herbert S. MacDonald and Margaretta Wolf Miller MacDonald. Stan attended Phillips Academy Andover, followed by Yale University, where he excelled at track (broad jump and hurdles) and earned a spot on the Yale-Harvard team, traveling to compete against teams in England and Ireland. While in college, Stan met the love of his life, Margaret (Binnie) Page Fitch. Stan and Binnie were married on June 24, 1960. The couple moved to Fredericksburg, VA while Stan attended basic training at the U.S. Marine Corps Quantico, VA Base. With the assignment of Hawaii, Stan and Binnie lived on the island of Oahu for 3 years, where Karen F. MacDonald and David R. MacDonald were born. After being honorably discharged with the rank of first lieutenant, Stan moved his family back to CT and took a job with Hartford National Bank & Trust Company. His second daughter, Laura P. MacDonald was born shortly after.
Having spent childhood summers on Squirrel Island off Boothbay Harbor, Stan had a real love for Maine and decided to move his family there. After a year in Cape Neddick, the family settled on yet another island, Mount Desert Island. Stan took a job at Bar Harbor Bank & Trust, where he happily spent 25 years as a commercial loan officer. He often spoke of his love for helping community members “realize their dreams” by getting their businesses off the ground.
Nothing was more important to Stan than his family, and he cherished time together and adventures with them: camping trips to Cape Cod, Florida, and Quebec; fall hikes up Katahdin; year round recreation in Acadia; post- retirement travels with Binnie throughout Europe and the southwest U.S.; and relaxing and playing together at the family camp at Spring River Lake. A true outdoor enthusiast, biking was a passion of Stan’s and he particularly enjoyed the annual Trek Across Maine, a 180-mile ride benefitting the American Lung Association, usually completed together with workmates Felice and Vicki from BHBT.
Stan also loved the island community and had a strong desire to give back. He was a founding board member of the Mount Desert Development Trust (now Island Housing Trust) and also served for years on the boards of Friends of Acadia, Camp Beech Cliff, and the Somesville Landing Corporation. He volunteered with the former MDI Youth Hostel and was an early advocate for grooming the carriage roads in Acadia for x-country skiing, spearheading the original volunteer group together with Somesville neighbor, Bob Massucco. In 2003, Stan was awarded the Friends of Acadia “Excellence in Volunteerism Award.”
Stan was a longtime member of the Somesville Union Meeting House, UCC where he served as a trustee and also organized one of his favorite events: the annual Jazz Sunday. For 20 years, Stan and his Dixieland band, The Bayside Stompers, performed to a packed house on Jazz Sunday. Stan learned from his father to play the tenor banjo as a teen, and the instrument brought him great joy for the rest of his life, including tours throughout New England as a young man, countless gigs on and around MDI, and summer evenings on the porch, strumming and singing to his kids while they played kazoos. When Stan moved to Birch Bay Retirement Village in 2018, music remained at the heart of his daily life, and he rarely missed an opportunity to enjoy visiting musicians, to sing or play his banjo and kazoos.
Stan is preceded in death by his sister Margaretta Anne MacDonald Royer of South Freeport, ME. He is survived by his beloved wife Margaret (Binnie); his children, daughter Karen F. MacDonald and wife Jaye L. Martin, son David R. MacDonald and wife Caroline M. Pryor and daughter Laura P. MacDonald; four grandchildren, Eliza and Jesse MacDonald, Zoë and Charlie Parker; special exchange-student “son” Arno Kienbacher; and many nieces and nephews. Stan’s love of life, sense of curiosity and adventure, positivity, kindness, kookiness, and brilliant smile will be missed by all.
The MacDonald family would like to express their deep appreciation to the caregivers at Safe Harbor at Birch Bay Retirement Village and Beacon Hospice. A graveside service will be held at 2pm Saturday, June 19th at Brookside Cemetery in Somesville, followed by an outside gathering to celebrate Stan and his life at the MacDonald home at 20 Freeman Ridge Road, SWH. In lieu of flowers, donations in memory of Stan may be made to:
Friends of Acadia, PO Box 45, Bar Harbor, ME 04609
Island Housing Trust, PO Box 851, Mount Desert, ME 04660
Somesville Union Meeting House, UCC, PO Box 96, Mount Desert, ME 04660
The Michael J. Fox Foundation, www.michaeljfox.org
Condolences may be expressed at jordanfernald.com