To share your memory on the wall of George Partridge, sign in using one of the following options:

Provide comfort for the family of George Partridge with a meaningful gesture of sympathy.

George attended school in Ellsworth and graduated from El... Read More
George A. Partridge, Jr., passed away June 21, 2019 in Ellsworth.
He was born in Ellsworth, September 05, 1935 the son of George A. and Linnie Idella (Terrio) Partridge, Sr.

George attended school in Ellsworth and graduated from Ellsworth High School class of 1953. He went to work following high school for George Partridge & Son, which was founded by his father in the 1940’s. He later worked for J.R. Cianchette driving a Euclid truck rebuilding Dow Air Force Base from 1955-1958. He also worked for Associated Builders for 20 years. He returned to work fulltime for his father building the Maine State Police Barracks in Orono and Houlton and a number of homes in Orono. George and Diane operated the Partridge Nest Child Care for 16 ½ years in their home.

George loved to fish and enjoyed woodworking. He and Diane had been married for 62 ½ years. He was a 50+ year member and Past Noble Grand of Lejok Lodge IOOF, Master Mason, member of Lygonia Lodge and Anah Shrine.

The family thanks the staff of Seaport Village and the ICU staff at MCMH for all their support and care.

A graveside service will be held 12:00, September 29, 2019 at Woodbine Cemetery, Ellsworth

We encourage you to share your most beloved memories of George here, so that the family and other loved ones can always see it. You can upload cherished photographs, or share your favorite stories, and can even comment on those shared by others.

Posted Jun 26, 2019 at 01:32pm
Diane I am devastated to hear of Georges passing. What an absolute honor it was to get to know him. What a kind soul. His adoration and love for you is that which others wish for.
Please except my heart felt condolences to you all at this time.
Comment Share
Share via:
M

Posted Jun 26, 2019 at 05:02am
Bampa,
No words can express the sadness in my heart. You were an extraordinary man who will always have a special place in my heart. I will never forget the times spent sitting in your lap singing songs and listening to you stories, time in the barn just hanging out watching you work, or sneaking around and stealing candy while you were napping! I can't believe I won't hear "Well, hello darlin'" when you answer the phone again but I sure am glad I got to hear and I love you one last time. I love you and miss you so much.
Comment Share
Share via:
LS 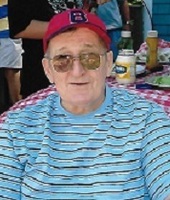