To share your memory on the wall of Florence Weeks, sign in using one of the following options:

Provide comfort for the family of Florence Weeks with a meaningful gesture of sympathy.

Print
Florence Worster Weeks died peacefully on February 27 after a fall. She was born Florence Evelyn Cousins in Old Town, Maine on August 22, 1921, the daughter of Edgar Millard Cousins and Arline Brown Cousins. Her family was prominent in Old Town; her... Read More
Florence Worster Weeks died peacefully on February 27 after a fall. She was born Florence Evelyn Cousins in Old Town, Maine on August 22, 1921, the daughter of Edgar Millard Cousins and Arline Brown Cousins. Her family was prominent in Old Town; her father spent time both as the mayor and as a legislator. By her own recollection, she was a lively child, never one to obey rules with which she did not agree. She graduated Old Town High School in 1938 and subsequently attended the University of Maine, where she graduated in 1942 with a degree in English. During college, she waited tables at the Hotel Pemaquid Dining Room for three summers. She was a member of Alpha Omicron Pi sorority. After graduation, she moved to Painted Post, New York, where she married Arthur Roscoe Worster, also a University of Maine graduate, who was from Madison, Maine.
Florence is survived by three children, Arthur James Worster and wife Lee of Easton, PA and Seal Cove, ME; Lawrence Edward Worster and wife Leslie DeGrassi of Green Valley, AZ; and Mary Lou Anderson of Rochester, NY. She is survived by six grandchildren—Kathryn Gleaves of Catonsville, MD; Jeff Worster and wife Michele of Lebanon Township, NJ; Elizabeth Medlin and husband Derek of Readington Township, NJ; Lorenzo Worster and wife Julia of Truckee, CA; Jesse Anderson of Rochester, NY; and Rebecca Anderson of Brooklyn, NY. She is also survived by seven great grandchildren—Emma Gleaves, Lily and Charlie Worster, Owen and Ana Medlin; and Sage and Aurora Worster.
In 1978 they moved to Davidson and then Flat Rock, North Carolina where Arthur passed away in 1987. She married Bill Weeks (her best friend’s widower) in 1994 and moved to The Highlands in Topsham, ME where Bill passed away in 2004. Bill’s three children, Bill Weeks (deceased), Nancy Singham of Albuquerque, NM, and Doug Weeks of Canandaigua, NY, were all a close part of her family, as well as former daughter-in-law Terry Worster of Catonsville, MD.
Throughout Florence’s life, she reached out to help people in need, starting with supporting “foster children” in Eastern Europe through a program that gave them food and educational supplies. She worked in the PACE after-school program People Assisting in People’s Education, as a volunteer instructor and companion for young adults who came from challenging home situations. In 1963, she and Art brought a struggling Laotian AFS student into the family where he remained for a year and a half. Bounchanh Sabandith, currently of Vientiane, Laos, became a member of the family. After Laos fell to the Pathet Lao in 1976, she and her family sponsored him and his family to immigrate to the United States to live.
She continued to play golf well into her 90s, only complaining that she did not hit the ball as far as she used to. She was known as an expert chipper and putter, and also as a stickler for the rules. When her companions tried to convince her to move her tee to the 150-yard mark, she objected because that was “cheating.” When she got a hole in one on the sixth hole at the Causeway Club while playing by herself when she was 75, she called the only other person in sight, her caretaker, Doug Hodgdon, to accompany her to the green to confirm it.
She was an intrepid traveler, sliding down underground chutes in Austrian salt mines or climbing the Native American ladders in the pueblos in Mesa Verde. She spent month-long visits to Switzerland in her early 80s with Bill. After Bill’s passing when she was 86, she traveled with Bounchanh to Laos and to Khong Island in the Mekong River to visit his birthplace.
She was known as “The Walker” everywhere she lived. In North Carolina, she lived on the back of the mountain where Carl Sandburg had lived. She climbed the mountain by herself nearly every day. She loved her cottage in Southwest Harbor, Maine, that her grandfather built as a guesthouse and spent every summer there from 1978 until 2016. She often walked up Flying Mountain to look down at Somes Sound and her beloved island. She walked downtown every day to pick up her mail, greeting the town as she went. She walked and talked her way through life. She knew everyone. She is known for having her own bench to rest on her way to the post office in her later years, a gift from friends. It is chained to a tree on Main Street, where she would rest and wave to passing cars.
She was active as a Deacon in the Somesville UMH, was a founding member of the Wendell Gilley Museum along with her husband, Art. She was a member of the Causeway Club and Southwest Harbor Fleet in Southwest Harbor.
A memorial service will be held at the Somesville Union Meeting House in late July. In lieu of flowers, the family requests donations to the Wendell Gilley Museum, The Somesville UMH, or Chans Home Health and Hospice of Brunswick.

Condolences may be made at www.jordan-fernald.com.

We encourage you to share your most beloved memories of Florence here, so that the family and other loved ones can always see it. You can upload cherished photographs, or share your favorite stories, and can even comment on those shared by others. 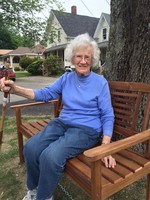