To share your memory on the wall of Esther Testa, sign in using one of the following options:

We encourage you to share your most beloved memories of Esther here, so that the family and other loved ones can always see it. You can upload cherished photographs, or share your favorite stories, and can even comment on those shared by others.

Posted Feb 28, 2020 at 10:59am
Esther was like another "mom" to us boys who grew up as close friends with John. She was kind, caring, supportive and always forgiving when we did the stupidest things. My heart is heavy with loss, but my soul is filled with love, joyous memories and eternal gratitude for her nurturing influence on my life. My heartfelt condolences for the entire family. Guy E Torrey
Comment Share
Share via:

Posted Feb 26, 2020 at 08:05am
So sorry for your loss. My first memories of Esther are from the carpenter shop when she work in the office and I played with John in and around the shop. More recently at Birch Bay with my mother. Esther was also very friendly and I have missed seeing her upstairs with my mother. Fondly, Ann Cough McCafferty
Comment Share
Share via:
PL

Posted Feb 26, 2020 at 07:32am
To the family of Esther,
My heart goes out to you all. She was an amazing women. One of the sweetest ladies in town. My prayers and condolences to you. ❤️🙏🌹 Paula Lamoureux
Comment Share
Share via: 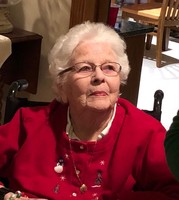