To share your memory on the wall of Edward Blackmore, sign in using one of the following options:

Edward Arthur Blackmore, 92, passed away on December 23, 2019, in Stonington, the town that he loved. Born in Blue Hill, Maine, on June 22, 1927, to James Frederick and Virginia (Gross) Blackmore, he grew up with his late brot... Read More
Stonington

Edward Arthur Blackmore, 92, passed away on December 23, 2019, in Stonington, the town that he loved. Born in Blue Hill, Maine, on June 22, 1927, to James Frederick and Virginia (Gross) Blackmore, he grew up with his late brother, Frank, in the loving home of his grandparents, Jason and Susan (Davis) Gross.

Edward was a graduate of Stonington High School and served in the U.S. Army in Aschaffenburg, Germany, with the occupation forces following World War II. Ed was a full-time lobsterman for the next 31 years. During this time, he became a charter member of the Maine Lobstermen’s Association (MLA) and was president and executive director from 1974-1991. A major accomplishment during this period was the Tax Reform Act of 1976, which recognized sternmen as independent contractors for tax purposes, and, also, in 1979, the State sales tax exemption on commercial fishing vessels.

He was a leader in establishing the lobster co-operative movement in Maine and was a member of the board of directors of the Stonington Lobster Cooperative for many years.

He served on the New England Fishery Management Council, was chairman of the Maine Lobster Advisory Council, and director and credit officer of Fishermen’s Credit Union. Ed was founding chairman of the Lobster Institute at the University of Maine, and he received an honorary doctorate degree from UMaine in 1992. He was a member of the board of directors for Commercial Fisheries News, the executive committee of Associated Fisheries of Maine, and the U.S. Coast Guard National Fishing Vessel Safety Board of Advisors.

On the local level, he founded and chaired the Stonington Harbor Improvement Committee, which led to the planning and development of the Stonington Fish Pier and Harbor Project. He was a member of the American Legion and Joshua Davis Lodge and served as a school board member.

After retiring from MLA in 1991, Ed enjoyed keeping in touch with fishermen through his job as a marine surveyor. He remained active in St. Mary’s Parish and the Island Community Center throughout his later years.

Ed will be remembered for his expressions of gratitude, bear hugs, one-liners, and ability to break into song at the slightest provocation.

He is survived by his wife of 71 years, Mary (Leali) Blackmore; daughter, Sally, and her husband, Curtis Haskell of Stonington; son, Blaine, and his wife Sharon Blackmore of Deer Isle; five grandchildren: Clay Haskell of Stonington, Molly (Haskell) Rowe of Swampscott, Mass., Amanda (Blackmore) Brehaut of Orrington, Megan (Blackmore) Swift of Windham, and Scott Blackmore of Deer Isle; seven great-grandchildren: Ashley and Colby Haskell, Will and Max Rowe, Edward and Andrew Swift, and Wyatt Brehaut; and several nieces and nephews.

The family would like to thank all the people who made it possible for Ed to live out his last years at home: loving caregivers Lori, Betty, Trish; all the people we will forever remember who sent food: Audrey Hamblen, Trish Brierley, Oscar and Diana Turner, Jean and Jim Jackson, Jeannette and Mike Parker, Karen Vickerson, the Kearney’s, (who fed us!) and gifts and visits by Connie and Doug Hamel and niece Carol Hamalainen.

In lieu of flowers, contributions may be made to the Town of Stonington for additional benches on the Hagen Dock/Stinson Park, where Ed loved to sit and watch the boats, P.O. Box 9, Stonington, ME, 04681 (please note how funds should be used), or to the Maine Lobstermen’s Association, 2 Storer St., Ste. 203, Kennebunk, ME 04043.

Plant a Tree in Memory of Edward
Plant a tree 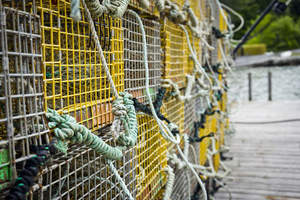