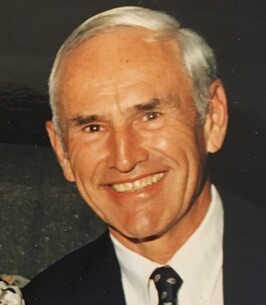 Ellsworth
Douglas Nelson Smith passed away peacefully with his family by his side on May 28, 2022, at the age of 98. Doug was born August 7, 1923, in Worcester, Massachusetts, the son of Ralph and Marion (White) Smith.

He was a graduate of Worcester Academy and Colby College; he also received his MBA from Harvard Business School. Doug was in the U.S. Navy during World War II serving in the Pacific. He was a longtime resident and civic leader of Ellsworth, serving on the boards of the Union Trust Company, Maine Coast Memorial Hospital, the YMCA, and the Ellsworth School Board. He was an outstanding member of many organizations including the Rotary, J.C.s, Chamber of Commerce, and the Maine Metal Products Association. He was the second recipient of the Chamber’s ‘Top Drawer’ award. He was a longtime member of the Ellsworth Congregational Church. He was an avid outdoors man with a passion for sailing, golf, gardening, fishing, and travel. He owned and operated the L. S. Thorsen Corporation in Ellsworth until his retirement in 1988. Following retirement, Doug and Mary traveled the country extensively visiting all 50 states.

A private service will be held at a later date. In lieu of flowers, contributions may be made to the Down East Family YMCA, P. O. Box 25, Ellsworth, ME 04605.