To share your memory on the wall of David Harkins, sign in using one of the following options:

David graduated from American High School in Zweibrucken, Germany, Class of 1971. He also served in the U.S. Army and was stationed in Germany.

David was a modern-day Renaissance Man. He was an accomplished carpenter/painter and artist who was comfortable using any medium when creating his artwork. From chalk to oil, to pastels or acrylics, David’s artwork was stunning to say the least. David was a humble and quiet man who declined to exhibit his artwork, but all who knew him were in awe of his creations and openly coveted each of them.

David is survived by his mother Virginia A. of Mt. Desert; brother Richard of Bar Harbor; daughter Tina Brown and her husband Steed of Winder, GA; four grandchildren and two great-grandchildren.

At David’s request, there will be no services. Those who desire may make contributions in David’s memory to their local S.P.C.A. or to the S.P.C.A. of Hancock County, 141 Bar Harbor Road, Trenton ME 04605.

Arrangements made by Jordan-Fernald, 1139 Main Street, Mt. Desert. Condolences may be expressed at www.jordanfernald.com
Read Less

Receive notifications about information and event scheduling for David

We encourage you to share your most beloved memories of David here, so that the family and other loved ones can always see it. You can upload cherished photographs, or share your favorite stories, and can even comment on those shared by others.

Plant a Tree in Memory of David
Plant a tree 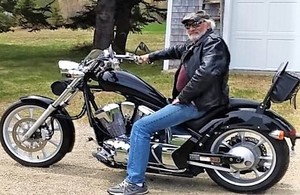