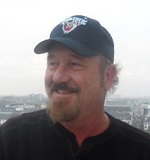 Southwest Harbor
Charles Carroll, 58, died peacefully November 1, 2020. He was born August 31, 1962 in Bar Harbor, the son of David and Mary (Devine) Carroll.
Charles graduated MDI High School, class of 1981. Following graduation, he served in the U.S. Air Force and then attended University of Maine at Machias. He settled back in Southwest Harbor where he spent the next 20 years working as a landscaper, an occupation he loved and where he met so many of his dearest friends.
When Charles was stationed in Germany in the Air Force, he developed a deep passion for Eastern Europe, its history, culture, and most of all, it’s people. He helped countless foreign students through the years come to the US to work, and in the process, he made lifelong friends as he opened his home to them. In the last 10 years, he began traveling back to visit some of these friends and explore Germany, Poland, Bulgaria, Lithuania, and other countries.
Charles will be forever remembered for his generosity. He was always willing to lend an ear, give advice, and just be there to support his friends. Not only was his home perpetually open to anyone who needed a place to live, but he gave everything he had if he thought that he could make someone happy. He never ever wanted or expected anything in return. The happiness of others and the knowledge that he made a positive impact on a person’s life brought him endless joy.
Charles could often be seen at the local bar with his other ‘family’. He spent many evenings there entertaining everyone with his stories (often embellished!) and simply enjoying the great company.
Charles never had any children of his own but that was okay to him. He much preferred being an uncle and he constantly spoiled his nieces and nephew with his time, his gifts, and his wisdom. His nieces and nephew were everything to him and he never tired of talking about them and spending time with them. The memories he left and the lessons he taught them are invaluable.
For those who were blessed enough to truly know Charles, will know that he was the most caring, loving, and loyal friend, brother, and uncle that anyone could ever have.
Charles was predeceased by both his parents. He is survived by his Sister Tracy and Gordon Hay of Stowe Vt, his brother Nathan and wife Vanessa of Southwest Harbor, and his sister Heather and husband Karl of Seal Cove and many cousins that he loved dearly. He is also survived by the great joys in his life: his nieces Maya, Emma, Julia, Courtney, and nephew David.
A celebration of Charles’s life will be held next spring/summer when his friends and family can all come together.
Farewell brother, uncle, cousin, and friend. You will be forever loved and never forgotten.
Arrangements by Jordan-Fernald, 1139 Main St. Mt. Desert. Condolences may be expressed at www.jordanfernald.com