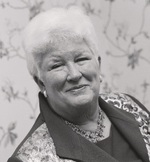 Carolyn Rolston Rourke, 81, of Surry, passed away peacefully in her sleep surrounded by her loving family in the morning hours of November 10, 2019.
She was born to Donald Marr Rolston and Freda Westlake Rolston on June 27, 1938 in Natrona Heights, PA. She graduated from Har-Brack High School in 1956, and from Mary Washington College of the University of Virginia in 1960. She spent one post-graduate year with the United States Public Health Service (USPHS) Hospital in Baltimore, MD, studying medical record science, after which she became a commissioned officer in the USPHS. In 1961, she was named Assistant Chief of Medical Records at the Clinical Center of the National Institutes of Health, where she worked her way to the rank of Commander, USPHS. For several months during the summer of 1962, she was loaned to the Peace Corps, Medical Division, Headquarters, Washington. She ended her twelve-year career with the USPHS by inactivating her commission in order to marry Dr. Anthony J. J. Rourke Jr. on January 26, 1974. As newlyweds, they moved to Yonkers, NY, and from there to Harrison, NY, where they reared their daughter, Suzanne Cartmill Rourke, born April 14, 1976.
Carolyn had three great loves besides her family, pursuits where she completely lost track of time: playing a pipe organ; swimming in a crisp New England lake; and spending time behind the helm of her 16-foot Boston Whaler, ‘Be My Eyes.’
She fondly remembered trips with her family to both Europe and the Orient. Though continuously blessed by community and dear friends throughout the course of her life, she never felt so much at home as she did by the sea with John in Surry. Her final days were spent in her beloved (and lovely) cottage, Idle Hour II, where she had never been more aware of the natural world that surrounded her. She reveled in learning the tides, the phases of the moon, and the travel of the sun from a winter to a summer sky. As her illnesses progressed, nothing brought more joy than the menagerie of wildlife that frequented her feeders; her favorite (the goldfinch), she lovingly referred to as ‘flying sunshine.’
Carolyn was predeceased by her husband of 24 years, Dr. Anthony J. J. Rourke Jr. She is survived by her sister, Suzanne R. Martin of New Kensington, PA; her daughter, Lt Col Suzanne R. Smith and son-in-law, Lt Col Jeffrey L. Smith; and two grandsons, Cole and Samuel, all of Eagle River, AK.
On November 14, 2019, at Jordan Fernald Funeral Home (113 Franklin St., Ellsworth), visiting hours will be held at 4:00 PM, with a remembrance service at 5:00 PM. A graveside service will be held November 15, 2019 at 3:00 PM at the Bay View Cemetery in Surry.
Contributions in Carolyn’s memory may be made to the Hancock County Hospice, Attn: EMHS Foundation, P. O. Box 931, Bangor, ME 04402-0931.
Condolences may be expressed at www.jordanfernald.com.

This obituary is protected by copyright by Ellsworth. Proudly Serving the Community of Ellsworth. Ellsworth is located in the state of Maine, United States.