To share your memory on the wall of Carol Dow, sign in using one of the following options:

Receive notifications about information and event scheduling for Carol

We encourage you to share your most beloved memories of Carol here, so that the family and other loved ones can always see it. You can upload cherished photographs, or share your favorite stories, and can even comment on those shared by others.

Posted Oct 04, 2019 at 12:38pm
I was saddened to see the obituary for Carol in the paper. She was such a wonderful and incredibly kind person. Truly a great spirit! She was so thoughtful to my father when he needed help, and I know she was also very supportive to many others. I loved the beautiful video that was put together with such thought, care and love. To me, Carol's radiant smile said so much about the love and joy she felt and shared with those around her. She was a great blessing to those who knew her, and was clearly very blessed to be surrounded by her loving family.
Rosie Smith Strickland
Comment Share
Share via:
SS

Posted Sep 29, 2019 at 08:39am
Peter and family, I was saddened to learn of your mother's passing. You and your family are in my thoughts and prayers during this difficult time. Alzheimer's is a terrible disease, "the long good-bye" and I have made a donation in your Mother's name to the Maine Alzheimer's Association.

Posted Sep 22, 2019 at 11:17am
Loving Memories of a Wonderful Woman. Highest Regards to the Dow and Martin Families. Shawn, Mary and Olivia Reed

Posted Sep 20, 2019 at 09:18am
Dear Dow Family, Our deepest sympathies for your loss. The Willcox Family

Posted Sep 19, 2019 at 02:34pm
Carrie & Greg, we are so sorry for your loss, but know that "Great" is with Jesus in Heaven! She was a sweet angel here on earth and now brightens the pathway of God's holy light! We remember her fondly sitting the the rocker at occasions at Lisa & Chris's house with Carrie's Louie by her side. GOD BLESS YOU ALL! You are all family to us! Marie and Alan Bartsch
Comment Share
Share via: 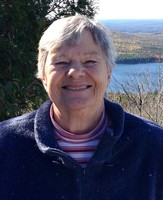