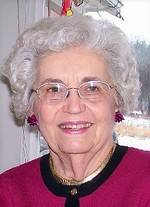 Blue Hill
Carol Gardien Trimble, age 94, died peacefully on Tuesday, August 13, 2019.
Carol was born February 9, 1925, in Birmingham, Alabama, to Lois (Watlington) Gardien and Edmund Nicholas Gardien. She was educated in local schools and attended Montevallo College where she was editor of the student newspaper. Following graduation she edited books for a Philadelphia publisher. Later, she earned a second degree in secondary education.
Carol and Fred Trimble met through mutual friends and married on April 3, 1948. They lived in Fred’s hometown, Decatur, Alabama, until Fred’s job transferred them to Detroit, Michigan, in 1958. They lived in Dearborn, Michigan, until 1969, when they moved back to Decatur. There Carol was on the board of the Friends of the public library and served as librarian at her church for twenty years. She was a substitute teacher in Decatur Public Schools and later volunteered as a teacher of adults studying for the GED exam. She loved to sing, to dance, to grow flowers, and to read. She had a wide circle of friends.
In 2007 Carol and Fred moved to Parker Ridge Retirement Community in Blue Hill to be closer to their children. Fred died there in 2017.
Their three children are Carol Trimble (George Orzel), Lamoine; Frederick Trimble (Jacky), Alden, Michigan; and Claudia Luchini (Andy), Ellsworth. Carol is also survived by nine grandchildren, seven great-grandchildren, and a sister, Barbara Gardien, of Washington, DC. Carol was predeceased by her parents, her brother Edmund N. Gardien, Jr., and a granddaughter, Allison Luchini.
Carol and her late husband Fred found much meaning in their church and received much love and support from its members: Brooksville United Methodist Church, PO Box 34, Brooksville ME 04617. In lieu of flowers, any donations may be made there or to a charity of the giver’s choice.
A memorial service will be held 2:00pm, August 19, 2019 at Parker Ridge, Blue Hill. Private interment will be at Seaside Cemetery, Blue Hill
Carol’s family would like to thank Dr. Baroody, Dr. Sinclair, as well as the staff at Parker Ridge for their kind, skillful, and loving care of Carol particularly in her final weeks.
Arrangements by Jordan-Fernald, 113 Franklin St. Ellsworth
Condolences may be expressed at www.jordanfernald.com