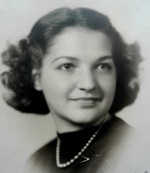 Cara graduated from Weaver High School in Hartford, Connecticut, and from the Hartford School of Nursing.

She was introduced to the love of her life, Capt. Ted Spurling Sr., by family friends—and Ted’s cousins—Bill and Ella Hadlock, while Ted was visiting them in Connecticut. She and Ted were married June 25, 1949, at Islesford, and celebrated 54 years of marriage before Ted’s passing in 2004.

Cara worked as a private duty nurse, and as a registered nurse at Mount Desert Island Hospital in Bar Harbor, and at Broward General Hospital in Ft. Lauderdale, Florida. After moving to Islesford, as well as raising two children, she served as a de facto community nurse, giving insulin shots to neighbors, and assisting with medical needs. She served for many years on the Cranberry Isles School Board, the Zoning Board of Appeals, and was a trustee of the Islesford Congregational Church. She was an avid reader and a patron of local arts.

Cara is survived by her daughter Serena Lee Spurling and partner Rick Alley of Islesford; her son Theodore Spurling, Jr. and wife Jeri of Islesford; granddaughters Marya Goettsche Spurling and husband Tor and their children of New Sharon, Maine; Christina Spurling of Somesville, Maine; Heather Spurling of Portland, Oregon; and grandson Paul Brumaghim of Northeast Harbor, Maine. Cara was delighted to have two great-grandchildren, Johan (2 ½) and Serena (one month), and met the newborn Serena recently. Cara is also survived by many nieces and nephews, especially Bill Puro of Rocky Hill, Connecticut; Jean Coleman Forest and husband Rick of Portland, Maine; and Robert Coleman and wife Linda of Coarsegold, California.

Her family would like to express thanks for the loving care of Mount Desert Nursing Association, who made it possible for Cara to stay in her own home for at least another year; and to the loving staff of Birch Bay Retirement Village.

A memorial service will be held at a later date. Interment will be at Islesford, Maine.

Gifts in Cara’s memory may be made to the Islesford Library, the Cranberry Isles Rescue Service, or to Mount Desert Nursing Association.