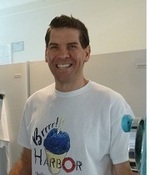 Bar Harbor—Brian Patrick Schaper, 44, died unexpectedly April 30, 2021, in Bar Harbor. He was born March 17, 1977, in Independence, KS, to David W. and Billie J. (Maley) Schaper.
Brian graduated from Independence Bible School in 1995 and then earned an associate’s degree from Independence Community College. He had owned and operated Brrrr! Harbor Shaved Ice in Town Hill since 2017, when he and his wife and son relocated to Mount Desert Island from southeast Kansas. Brian had been in the shaved ice business since the age of 12, working first for his dad and then opening his own business in Independence, KS, after college.
Brian enjoyed playing sports of all kinds, especially tennis and basketball. He also spent much of his free time listening to music, hiking, biking, kayaking, camping, traveling with his wife and son, and spending time with his family. He will be remembered for his sense of humor, hard work, kindness, and adventurous spirit.
Brian is survived by his wife, Amanda (McCollum) Schaper; his son, Xavier Schaper; his parents of Cherryvale, KS; brothers Derek and Jeffrey of Cherryvale, KS; and his sister Melanie Schaper of Pittsburg, KS and her wife Amy Gossard. He was preceded in death by his beloved brother David Schaper, Jr.
Friends are invited to call 4-6pm, Thursday, May 6, 2021 at Jordan-Fernald, 113 Franklin St., Ellsworth.
A service of remembrance will be held at 2:00 p.m. Saturday, May 8, 2021, at Ellsworth Church of the Nazarene, 445 High St., Ellsworth. Interment will be at Fairview Cemetery, Cherryvale, KS. Gifts to the Brian Schaper Memorial Fund will be used for his son’s education and future needs and may be sent c/o Camden National Bank, P. O. Box 239, Mount Desert, ME 04660.
Condolences may be expressed at www.jordanfernald.com