To share your memory on the wall of Boyd Bowden, sign in using one of the following options:

Boyd served in the U.S. Navy from 1947 to 1950. Most of his time was spent aboard the U.S.S. Springfield CL 66. Following his military service, he graduated from Coyne Electrical School in Boston. His training took him to jobs at Bath Iron Works, the Stonington - Deer Isle Yacht Basin, and finally to the New England Telephone Company, where he worked from 1956 until his retirement in 1990. Thirty-three of those years were spent in the Toll Test department on Second Street in Presque Isle.

Boyd and Eva began their life-long romance when he was in fifth grade and she was in sixth. He often remarked that that turned out to be a pretty good decision for one so young.

He was predeceased by his parents. He is survived by his wife of 66 years, Eva M. (Wight) Bowden, of Presque Isle; his son Gary M. Bowden of Presque Isle; daughter Beth A. Brown of Poland, Maine; granddaughters Tiffany A. Brown and Brittany L. Brown Thayer; and great-grandchildren Leyton C. Thayer and Greyson M. Thayer.

Calling hours will be this Tuesday, Dec. 11th. from 5pm to 7pm at the Duncan-Graves Funeral Home in Presque Isle. A funeral service will be held at Jordan-Fernald Funeral Home, 113 Franklin Street, Ellsworth, Maine, at noon on Thursday, Dec. 13th. Interment will be at 1:00pm, May 31, 2019 at Grindle Cemetery, Kingdom Road, Blue Hill

Memories and condolences may be shared with the family at www.duncan-graves.com or at www.jordanfernald.com
Read Less

Receive notifications about information and event scheduling for Boyd

We encourage you to share your most beloved memories of Boyd here, so that the family and other loved ones can always see it. You can upload cherished photographs, or share your favorite stories, and can even comment on those shared by others. 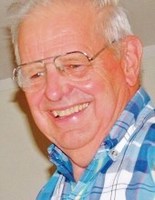