To share your memory on the wall of Barbara Herget, sign in using one of the following options:

In recent years, she used her exceptional teaching skill to share her love of quilting. Those early sewing lessons with her grandmother set the foundation of an artist. She loved her quilting groups deeply and resented the progression of her health that made her gradually step back from them.

Barbara took great joy in her family, particularly her grandchildren and great-grandchildren. She was an adopted grandmother and called “Gram” by many, and she reveled in it. She is very much loved and missed.

Her celebration of life will be held at the Ellsworth Community of Christ, 283 State Street, Monday August 19 4:30 - 7:30 pm. In lieu of flowers, please consider a donation to Hancock County Quilters for their Comfort Quilts project. Checks can be written payable to Hancock County Quilters and mailed to 14 Viking Trail Lane, Surry, ME 04684
Arrangements by Jordan-Fernald, 113 Franklin St. Ellsworth
Condolences may be expressed at www.jordanfernald.com
Read Less

Posted Aug 19, 2019 at 11:22pm
I am so very sad I will not be able to talk to my cousin, Barbie Ev. We had so many conversations about our family in the old days. I drove us to Skowhegan to visit uncle Dick once and really enjoyed our time together. She made the most amazing quilts. I will miss her a lot. I am so sorry that I was unable to attend the celebration of her life due to my health. She loved her family so much and was thrilled with her great grandchildren. She will always be in our hearts.
Comment Share
Share via:

Posted Aug 18, 2019 at 10:51am
I was blessed to have known Gram the last few years. She was an ardent supporter of her granddaughter, Melissa Burkart, and hence Ten Bucks Theatre Company! I loved seeing Gram at all the shows! She even helped us in the box office kn many occasions. Gram made THE BEST strawberry jam! I was fortunate to receive several jars over the years and delighted in hoarding them from the rest of my family. Gram also made some costumes for our shows. She will be missed by our entire TBT community.
Comment Share
Share via: 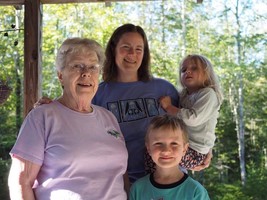