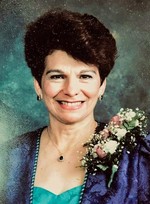 Alicia Paredes Scribner, 81, passed away peacefully, Tuesday, September 22nd, 2020 at her home in Dallas, surrounded by family. A wife and mother of four children, grandmother of seven and an aunt to nieces and nephews all over the world, she wanted all to know the joy of her life was her family; this love of family and friends was felt in her distinct laughter, elegant generosity, and fierce loyalty.
Alicia was born in Coatzacoalcos, Veracruz, Mexico, but grew up in Mexico City from 6 months of age. At age 9, she moved to the United States with her family, briefly living in Houston, Texas and eventually, in 1952, settling in Los Angeles, CA where she went to junior high, high school and started college. Soon after starting college, she set out for Europe and studied language, culture, and history at both the Sorbonne in Paris and the University of Madrid, where her love of the arts and of travel were further ignited.
In 1961, upon returning from studying abroad, she met her husband of more than 58 years, Jay D. Scribner. They were married in Los Angeles in 1962, and spent their first summer together in Northeast Harbor, then settled in Augusta, Maine for their first year of marriage, where their first child was born, subsequently living in Palo Alto, CA; Los Angeles, CA; Philadelphia, PA; Austin, TX and Dallas, TX, always returning to their beloved home in Seal Harbor, ME for summers. Because of her many friends and family relationships in Maine, Mount Desert Island and Seal Harbor always held a special place in her heart.
While raising four children, playing host for her husband’s faculty and many local and international dignitaries, she made time to return to the university to finish her undergraduate degree in reading and bilingual education (BS ‘77), and continue on for two masters degrees (MEd ‘82 & ‘87), and a doctorate in school psychology at Temple University (PhD ‘89). At the time of her passing, she was a retired professor of school psychology from Texas State University.
Alicia will be lovingly remembered by her husband, Jay D. Scribner and her children, Jay (Karen), Kent (Suleyka), Samantha, Connie (Ryan) Shultz. She will also forever be remembered by her grandchildren, Pierce, Bo, Julian, Jacqueline, Sophia, Harper and Everett; her sisters, Irma Bravo, Consuelo and brother in law Germán Hernández; her nieces and nephews from Spain, the US and Mexico. Alicia was predeceased by her sister, Ruth, her parents, Luis and Consuelo, and husband Jay’s Aunt Bernice Pierce.
A funeral service honoring Alicia’s memory will be held on Saturday, October 17th, 2020 at 2:00 pm at All Saints Catholic Church, where Alicia was an active member, located at 5231 Meadowcreek Drive, Dallas, Texas 75248. The services will also be live-streamed. Interment of her cremated remains will take place at a later date in her family plot in the village of Seal Harbor, Maine on Mount Desert Island.
In lieu of flowers, the family invites donations to the Alicia Paredes Scribner Scholarship Fund for a student at All Saints Catholic Elementary School. Donations can be made online at: https://one.bidpal.net/aliciaparedesscribnermemorialfund/welcome or a check can be sent to: All Saints Catholic School, 7777 Osage Plaza Pkwy, Dallas , Texas 75252.
Condolences may be expressed at www.jordanfernald.com