To share your memory on the wall of Agnes Carr, sign in using one of the following options:

Provide comfort for the family of Agnes Carr with a meaningful gesture of sympathy.

We encourage you to share your most beloved memories of Agnes here, so that the family and other loved ones can always see it. You can upload cherished photographs, or share your favorite stories, and can even comment on those shared by others.

Posted Apr 15, 2019 at 07:15am
Lucy and I have many fond memories of Agnes over the years..even got her up in an airplane once!. Lucy was in the BPW of Ellsworth with Agnes many years ago with fond memories..Always hard when we lose our parents, but they are now back together. Condolences to Tom and Pam.
Randy
Comment Share
Share via:
RF

Posted Apr 12, 2019 at 03:23pm
Over the years, have had many laughs and more serious discussions with Agnes, she will be missed greatly as a customer, sometime mentor, and friend. My condolences to Pam and Tom and their families. As always, if you need anything, feel free to cll.
Ron Fortier
Comment Share
Share via:
BN

Posted Apr 12, 2019 at 11:04am
Pam and I were sad to hear of Agnes's passing and send our condolences to Tom and Pam as well as other family members and friends.

I have very fond memories of my childhood visits to Maine and spending time with both Agnes and Sam, particularly the times at George's Pond and snowmobiling. It was really a treat to spend time with both of them. I am also appreciative of the extensive genealogy information that Agnes put together. As a result of doing some research of my own, I've come to understand how impressive Agnes's efforts were.

"AG" was the reason for some very nice memories that both Pam and I share and we'll always be thankful for that. 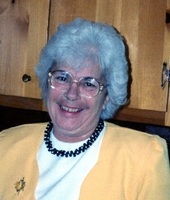